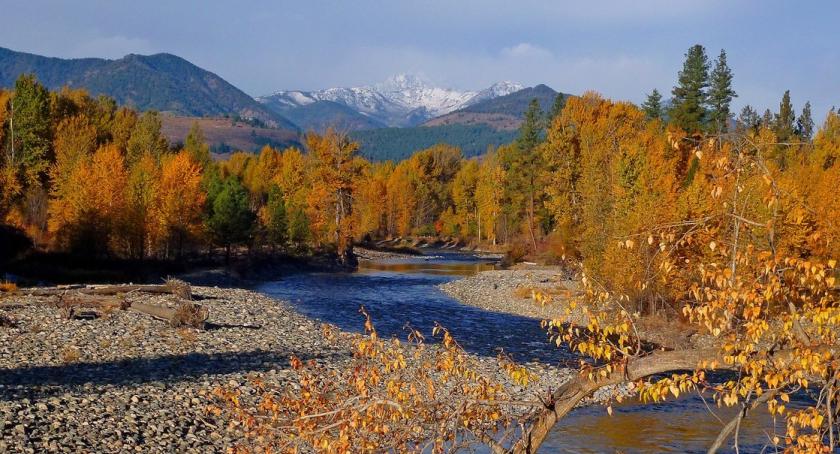 A riparian area of aspen and Ponderosa pine along an unconfined reach of the Methow River near Winthrop, Washington. 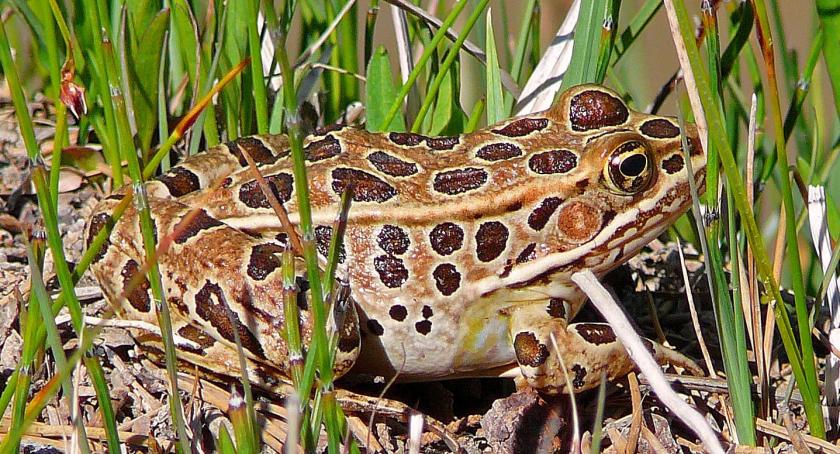 Northern leopard frogs are designated a "species of greatest conservation need" and depend on riparian ecosystems. 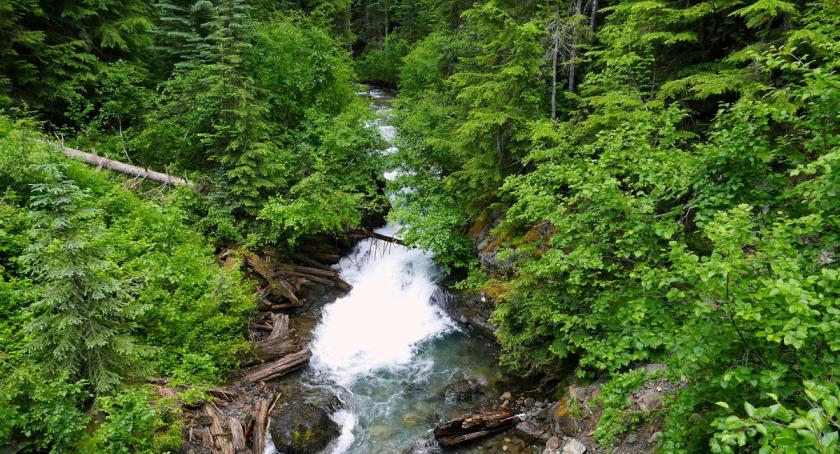 Relatively undisturbed riparian area along a headwater stream in the Okanogan-Wenatchee National Forest. 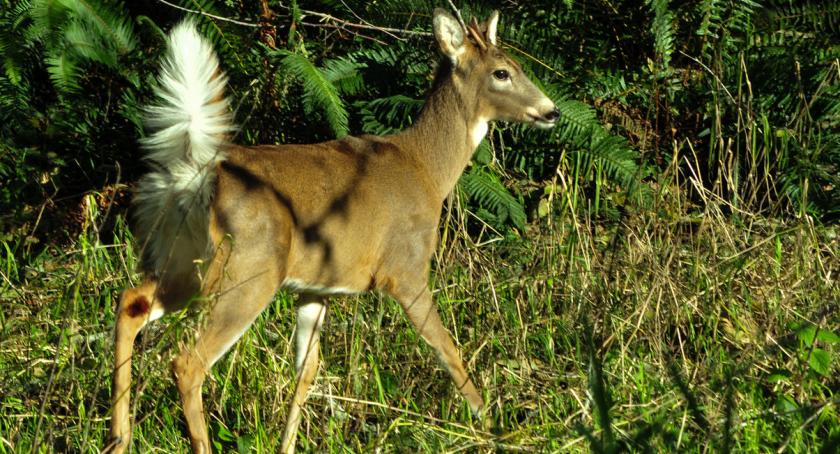 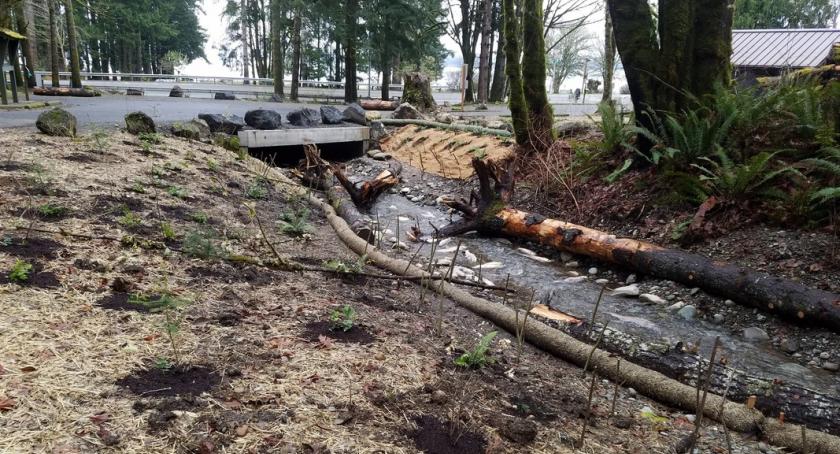 Riparian plantings along a stream with restored fish access in Potlach State Park.

Riparian areas contain elements of aquatic (water) and terrestrial (land) ecosystems. The interactions between water and land create an environment that is critical to the survival and existence of land-based and aquatic species. Known for their moist and mild microclimates, riparian areas have fertile soils that enhance plant growth and support complex food webs. Riparian areas are a critical resource as they directly benefit numerous wildlife species, including many that we in Washington cherish for their recreational and intrinsic values.

Riparian areas are unique because they are the transition between terrestrial (land) and aquatic (water) ecosystems. In general, riparian areas are along streams, rivers, and other flowing waterways. Because of their position on the landscape, riparian air temperatures are more moderate than surrounding areas and soils tend to be moist. Riparian plants are usually adapted to growing in wetter conditions. The linear shape of riparian areas makes them a natural corridor for animals to move through the landscape.

Riparian areas are along rivers, perennial or intermittent streams, seeps, and springs throughout Washington. Because they generally occur as narrow bands of land, riparian habitat covers a relatively small amount of Washington’s total land area.

Although riparian systems make up a small share of the state’s land area, they provide a disproportionate amount of Washington’s fish and wildlife habitat. In fact, more than three quarters of Washington’s land-based species use riparian areas as habitat. For this reason, riparian ecosystems are designated as a priority habitat. Many aquatic species, including fish and invertebrates, also depend on riparian areas as they influence instream habitat. This richness in biodiversity makes all riparian habitat a statewide conservation priority in Washington.

Riparian areas are widespread and come in a variety of forms. In Western Washington, they are mostly forested or densely vegetated. The most abundant and widespread westside riparian habitats occur in low elevation floodplains. In these lowland riparian systems, annual flooding creates a wide array of vegetation types, including woodlands, dense shrublands, wet meadows, and marshes. Lowland riparian ecosystems are usually dominated by hardwood (e.g., alder and cottonwood) and shrubs (e.g., red osier dogwood). Conifer trees begin to appear as riparian systems mature.

Riparian vegetation in the Columbia Basin often shows a more abrupt change in appearance at their transition with nearby uplands. Trees and shrubs that require more moisture are confined to these riparian systems, which typically get their water from shallow groundwater or from intermittent soil saturation. Common trees in these systems include black cottonwood, white alder, and quaking aspen. Common shrubs include willow, red osier dogwood, snowberry, and mock orange.

The moderate climate within riparian systems is one reason why these areas are an important part of the landscape. Many animals use riparian areas during hot summer months because water and dense vegetation create a cooler and more hospitable environment. This is true for many migratory birds as well as frogs and salamanders that are sensitive to extreme temperatures.

To avoid severe Eastern Washington winters, species such as the greater sage-grouse and Columbian sharp-tailed grouse require riparian areas because they often are warmer than surrounding uplands and are protected from harsh winds. Riparian areas also serve as major corridors for large migratory species such as elk and as shorter movement corridors for smaller mammals and amphibians.

Although most aquatic species do not directly use riparian areas as habitat, riparian systems provide vital benefits to fish and other aquatic species. For example, riparian trees and other vegetation provide important shade, which cools streams, especially during hot summer months. This cooling effect indirectly benefits many of Washington’s salmon species that are not adapted to warmer waters.

Riparian areas can also create and change instream habitat in ways that benefit aquatic species. This often happens when large trees fall into streams, creating spaces for fish to find cover and shelter. These trees can also help form deep pools that serve as ideal spaces for adult fish to rest and for young fish to avoid predators. Riparian areas also benefit aquatic life by filtering pollutants before they can enter the stream.

The plan links species of greatest conservation need to the specific habitats they depend on. To not only survive but thrive, these species require quality habitats.

The following list features Species of Greatest Conservation Need that depend on riparian habitats.

"At-risk" species include animals that are listed as sensitive, threatened, or endangered at the state or federal level. The following section highlights a few of the at-risk species that rely on riparian habitats at some point during their lives.

This westernmost subspecies of white-tailed deer exists in small, isolated populations, rendering it vulnerable to such factors as disease and loss of habitat. This species also will be greatly affected by climate change because sea level rise will reduce this species' tidally influenced island and lowland habitats.

This frog is endangered in Washington. Only one known population remains -- in Grant County -- with limited information about population status and trends. Efforts are underway to determine the feasibility of translocations of these frogs to their former range.

Northern leopard frogs are semi-aquatic, requiring aquatic and terrestrial habitats. They are typically underwater (aquatic) during winter and on land (terrestrial) during the summer. The frogs require deep, well-oxygenated water that does not freeze solid for hibernation. These frogs are challenged by non-native vegetation and encroaching, native wetland vegetation that reduce the amount of exposed shoreline where they breed and forage. Northern leopard frogs may be preyed upon by many species throughout their life, but the most common are mustelids (weasel family carnivores), bullfrogs, and fish.

The Oregon spotted frog is a rare species in Washington. Stressors include wetland loss and alteration caused by humans or the natural process of wetland succession, the introduction of non-native/invasive species, and modifications of creek and river channels. Only six watersheds are known to contain Oregon spotted frogs. The species requires breeding sites in shallow water with short vegetation and full sun exposure.

WDFW partners with the U.S. Fish and Wildlife Service and Washington Department of Natural Resources to protect the Oregon spotted frog. Each year, biologists conduct frog egg mass counts to estimate the number of breeding adults and to better understand habitat use. Partners also include private landowners who actively manage their property to help preserve this rare frog.

Other places to visit

Riparian is identified as a “Priority habitat” under the Priority Habitat and Species Program. Priority habitats are habitat types or elements with unique or significant value to a diversity of species.

A priority habitat may consist of:

The Priority Habitat and Species Program is the Department's primary means of transferring fish and wildlife information from our resource experts to local governments, landowners, and others who work to protect habitat. This information is used primarily by cities and counties to implement and update land use plans and development regulations under the the Growth Management Act and Shoreline Management Act.

The State Wildlife Action Plan is part of a nationwide effort by all 50 states and five U.S. territories to develop conservation action plans for fish, wildlife, and their natural habitats—identifying opportunities for species’ recovery before they are imperiled and more limited. A habitat of greatest conservation need is defined as an ecological system and community types that are essential to the conservation of Species of Greatest Conservation Need in Washington.

Climate change affects riparian systems through forces such as extreme precipitation and wildfire and through changes in seasonal inputs of water from rainfall and snowmelt. These changes are expected to increase the intensity of winter flooding and decrease summer stream flows.

Because riparian areas are directly linked to nearby waters, changes in stream flows also impact riparian ecosystems by altering soil moisture and the groundwater below riparian areas. In some watersheds, more extreme flooding events may increase the risk of erosion in riparian systems. Increased water temperatures, especially in summer, may also reduce the moderating influence that adjacent streams have on riparian microclimates. All these impacts influence the way riparian areas interact as fish and wildlife habitat in Washington.

WDFW is involved in a variety of work to benefit riparian ecosystems and the species that use the habitat. These are a few projects we are doing with our partners to protect and restore riparian habitat across Washington.

A changing climate is bringing extremes to the Chehalis Basin. In the last 50 years, there have been 14 federally declared disasters within the Basin. This, combined with human development and land use, have led to significant habitat loss and degradation over the past several decades. Salmon and other aquatic species have declined dramatically and face a dire future in the Basin. In response to this, the Aquatic Species Restoration Plan was designed to protect aquatic species and restore their habitats–now and in the face of climate change—and is a key component of the Chehalis Basin Strategy.

Learn how WDFW is participating in aquatic and riparian restoration projects in the Chehalis Basin.

In southeastern Washington, WDFW and the Asotin County Conservation District are sponsoring the Joseph Creek Riparian Restoration project. Joseph Creek, a tributary of the Snake River, has experienced higher stream temperatures than in nearby tributaries. Therefore, riparian habitat is being enhanced with vegetation along Joseph Creek. This project will help populations of Chinook salmon and steelhead by creating shade that will lower stream temperatures. Learn more about this project.

Beaver are a keystone species, creating habitat and influencing natural processes that many other species depend upon. WDFW collaborated with the Yakama Nation to relocate beavers that were a nuisance in urban and agricultural areas. Biologists trapped beavers and strategically relocated them to priority Yakima River tributaries. This relocation saved beavers from lethal removal and also helped improve fish habitat by restoring riparian function and improving water quality and hydrology.

Learn more about this project:

Get involved in your community