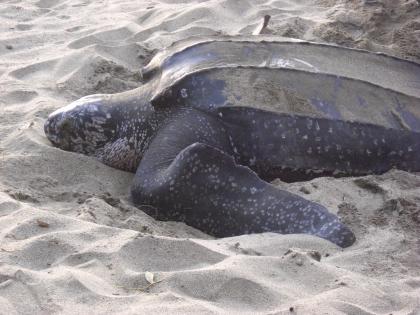 These turtles are rare and declining across their range, with an estimated 40 percent decline in the global population over the past three generations.

They are threatened by many factors, primarily outside of Washington, however, issues related to climate change and plastic pollution could be addressed in Washington and benefit multiple marine species.

The leatherback sea turtle is the world's largest turtle. It weighs up to 1,000 pounds, and an adult's soft shell ranges from 5 to 6 feet in length. The carapace (top shell) has seven lengthwise ridges and tapers toward the back.

The species moves hundreds or thousands of miles between nesting beaches and distant marine waters. Migrations near and around the equator have been documented.

The principal food consumed by leatherback sea turtles is jellyfish, although other invertebrates, fishes, and seaweed are sometimes eaten.

Pregnant females go directly from temperate latitudes to preferred nesting beaches, and individual females may nest on multiple beaches within a region. Nests are placed on sloping sandy beaches backed by vegetation, often near deep water and rough seas. The largest colonies occur on continental, rather than island, beaches. Leatherbacks using Washington waters most likely nest across the Pacific Ocean in Indonesia and Papua New Guinea.

Little is known about the lifespan of leatherbacks, although it is thought to be 50 years or more.

Leatherback turtles occur in tropical, temperate, and subpolar oceans worldwide. Some of the turtles foraging off the west coast of North America, including Washington, nest in western New Guinea. Most populations in the Pacific are in steep decline.

Numbers of turtles visiting Washington's waters are unknown, but telemetry data suggests abundance may be higher than indicated by the few sightings.

Leatherback sea turtles will be sensitive to climate change through a number of pathways. Turtles may respond directly to increases in temperature by shifts in sex ratios; warmer temperatures promote higher levels of female young. Increases in sea surface temperature could also lead to changes in migration patterns, northward species shift, and alterations in nesting and hatch timing, which could prompt mismatches between turtle abundance and prey availability. While possible, jellyfish populations have been on the increase, so a negative effect here is uncertain unless the species composition of the sea jellies involved is less favorable or unfavorable. Increases in sand temperature could lead to higher levels of hatchling mortality. Indirectly, increases in sea surface temperature and potential changes in upwelling and ocean circulation could affect the jellyfish that leatherbacks tend to prey upon and limit prey availability. Turtle nesting habitat may also be impacted by sea level rise, increased storms, and coastal inundation, which could lead to lower reproductive success. Susceptibility to storm-related threats may vary by species such that species with lower nest-site fidelity, like leatherbacks, would be less vulnerable than sea turtles with higher site fidelity. The broad migratory range of leatherbacks may allow them to search out different suitable nesting habitat; leatherbacks have low nest-site fidelity and thus may be able to switch nesting sites depending on conditions (although nesting occurs outside of Washington State). With an increase in mean air, and therefore beach sand temperatures, previously unsuitable habitat, for example beaches at higher latitudes than current nesting areas, may become suitable. Leatherback turtle nests are now being recorded at their most northerly in a decade of monitoring. However, data are lacking on how quickly leatherbacks will be able to take advantage of these changes.

See the Climate vulnerability section above for information about the threats posed to this species by climate change.