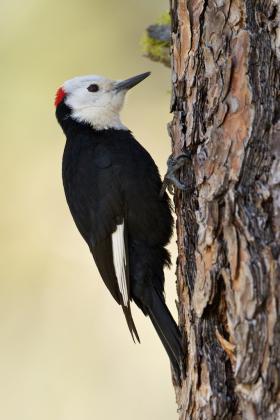 Males of this species have a red patch on their head.
Category: Birds
State status: Candidate
Vulnerability to climate change (More details)

The white-headed woodpecker is about 9 inches in length. Its head and throat are white; the body and wings are black with white wing patches. A bright red patch is on the back of the adult male’s head; a paler red patch may be seen on juveniles.

This species uses conifer forests dominated by ponderosa pine, Douglas-fir, and occasionally other tree species such as aspen. Most areas are characterized by wide tree spacing, which produces an open canopy. The species was associated with large-diameter trees and snags in some studies, but recent work also indicates use (including nesting) of smaller trees and snags retained in clearcut harvest units.

White-headed woodpeckers most frequently roost in cavities, typically in ponderosa pines (live trees and snags), but also roost in spaces behind peeling bark and in crevices within tree trunks. Cavities are also used as winter roosts, and frequently the same cavity is used over an entire season.

White-headed woodpeckers use both live and dead trees for foraging. Pine seeds are a major part of the species diet, especially in fall and winter. They also consume a variety of insects and other invertebrates.

Live and dead trees are also used for nesting. Males and females share in both incubating their eggs (on average about 5) and feeding of their young. Males roost in the nest cavity with their young until they fledge.

White-headed woodpeckers occupy dry forests in the range of ponderosa pine in Washington’s eastern Cascade Range, the northeastern forests and in the Blue Mountains. Except for a small area in southern British Columbia, northern Washington represents the northwestern extent of the species’ range. The species is uncommon, and a population estimate is not available. In some areas, individuals may descend to lower elevations during winter, and this is reflected in annual home range estimates some of which exceed several hundred acres.

For maps of range-wide distribution and conservation status of white-headed woodpecker, check out NatureServe Explorer and the International Union for Conservation of Nature Red List.

Sensitivity of white-headed woodpeckers is influenced by warmer temperatures and precipitation changes that affect prey availability and habitat extent. Warmer temperatures are linked with higher surface-bark insect abundance and enhanced forage opportunities. White-headed woodpeckers require montane coniferous forests dominated by pines, which may be sensitive to precipitation changes and altered wildfire regimes although these impacts could benefit the species (e.g., by providing more snags). Higher nesting and incubation success has been associated with warmer temperatures.