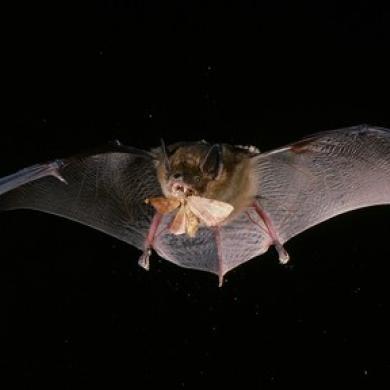 The big brown bat is one of the largest bat species in Washington and features a heavy body, large head, and broad nose. The fur varies from pale to dark brown, is darker above and lighter below, and has an oily texture. Individual hairs on the back are relatively long and extend one-quarter of the way down the upper surface of the tail membrane. Wing membranes and ears are black. Ears are relatively rounded and short, and barely reach the nose when pressed forward.

Food habits and foraging
The large, powerful jaw musculature and heavy teeth of big brown bats allow them to feed on hard-bodied insects as well as other prey. Beetles typically form the bulk of their diet, while moths, termites, true bugs, leafhoppers, flies, and flying ants are other main foods. Other regional studies have found preferences for caddisflies, bees, and ants.

Reproduction
Pregnancy lasts about 60 days. Births occur from May to August. Litter size is usually one pup in Western North America.

Big brown bats range from southern and central Canada to northern South America and the Caribbean. This species is present throughout Washington. The big brown bat is a habitat generalist that occupies a variety of forest types, rangeland, and urban areas. In Washington and Oregon, the species appears to be more common in forest than shrubsteppe and alpine areas. Occurrence in the West extends from sea level to 3,800 meters in elevation. In mountainous areas, males inhabit higher elevations than females.

Roosting
Summer day roosts of this species, including maternity colonies, occur in a variety of settings, including buildings (e.g., inside attics and walls), trees, snags, caves, mines, crevices in cliffs, and bridges. Reproductive females are colonial and occupy sites offering suitable temperature gradients. Maternity roosts are often in older buildings having appropriate entry points or in large live or dead trees in intermediate stages of decay. Occupation of trees and snags depends on the presence of cavities, hollow trunks, crevices, loose exfoliating bark, and dead or broken tops; cavity volume; openness from surrounding vegetation; and older age of the forest stand. Ponderosa pine, aspen, and Douglas-fir are among the main tree species used for roosting.

Maternity roosts in the West usually contain anywhere from about a dozen to several hundred individuals, but in other regions, females sometimes roost in smaller groups or alone. Buildings offer greater safety from predators and warm microclimates, resulting in earlier births, faster juvenile growth, and increased energy savings, and therefore are probably preferred as roosts over some types of natural sites. Most adult females return to the same maternity roost or roost area in successive years.

Hibernation
Hibernacula (place where an animal spends their winter) include buildings, caves, mines, and rock crevices but the extent that other natural sites (e.g., hollow trees) are used is poorly known. Hibernacula generally have air temperatures of 0-18°C (32-64°F). Some winter sites also function as maternity roosts in summer.

Swarming behavior occurs at mines and caves before hibernation. Hibernation lasts from November to April. Hibernacula rarely hold more than a few hundred individuals with those present usually roosting alone or in small clusters of fewer than 20 animals. Both sexes hibernate together. Individuals may lose 25% of their pre-hibernation body weight over winter, thus failure to accumulate sufficient fat reserves can be a major mortality factor, particularly for juveniles. Movement among hibernacula is common within a winter.