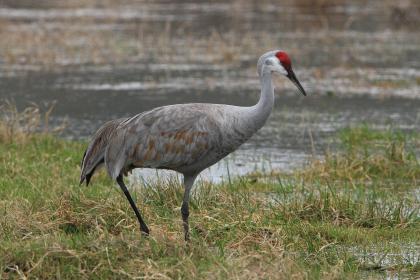 Sandhill crane (Jim Cummins)
Category: Birds
State status: Endangered
If you see this species, please share your observation using the WDFW wildlife reporting form. Providing detailed information such as a photo and exact coordinates will improve the confidence and value of this observation to WDFW species conservation and management.

The Washington population size of greater sandhill cranes is critical but the trend is increasing; they number about 100 adult and sub-adult birds, with about 40 breeding pairs. WDFW has designated this subspecies as a "Species of Greatest Conservation Need."

Adult sandhill cranes are primarily gray in color and have a reddish cap. Subadults have a pale rust-colored head and neck; their body is gray, overlaid with a mottled rust-color. Adults are about 3½ feet in length, and their wingspan is a little over 6 feet across.

Sandhill cranes are long-lived, but have a low reproductive rate, and nests are vulnerable to predators, disturbance, and fluctuating water levels.

Breeding territories contain wetlands, grassy uplands, partially forested uplands, and wet meadows, and are sometimes surrounded by forest. Sandhill cranes nest in wet meadows and grasslands. Emergent vegetation is a key component of their preferred nesting areas. Nests, which are built in emergent vegetation in shallow water or close to water, are a mound of plant material pulled up from around the site and anchored to surrounding vegetation.

During migration and in winter they live in more open grassland and river valleys, and often feed in agricultural fields. Sandhill cranes typically use habitats where they have clear views of their surroundings.

The courtship of cranes includes elaborate rituals, and birds often mate for life. Pairs return to the same nesting territories year after year and sometimes use the same nest repeatedly.

The young learn migratory routes from adults, and Washington birds migrate to the Central Valley of California.

Over 35,000 lesser sandhill cranes make an annual stop in the southcentral Columbia Basin. The largest concentration of sandhill cranes migrating in the Pacific Flyway are attracted to the area’s rich croplands and wetlands, including the WDFW Sunnyside-Snake River Wildlife Area. The Windmill Ranch Unit alone can host over 1,500 lesser sandhill cranes during their northward migration in early spring. After their few weeks stop in the Othello area, the sandhill cranes continue their migration north to their breeding grounds in south-central Alaska. Less than 100 greater sandhill cranes breed in Klickitat and Yakima counties. In the fall, the sandhill cranes migrate through Eastern Washington and back to their wintering grounds in California's Central Valley. They can travel up to 400 miles per day. Each spring, bird enthusiasts celebrate the return of the cranes at the annual Othello Sandhill Crane Festival.

Sandhill cranes bred in western Washington historically; these were likely the Canadian subspecies. Historical records of breeding in western Washington are meager, but sandhill cranes apparently nested in at least small numbers. In the 1850s, naturalist George Suckley noted that during spring and summer, “In the vicinity of Fort Steilacoom [Pierce County], only stragglers remain to breed,” and naturalist James G. Cooper called them, “a common summer resident, arriving at the Straits of Juan de Fuca in large flocks in April and then dispersing in pairs over the interior prairies to build their nests…” (Suckley and Cooper 1860:227-228).

Canadian sandhill cranes may nest in the lower Columbia region in very small numbers; in 2002, a pair with young was reported on Sauvie Island in Oregon. This 26,000-acre island is located along the Columbia River, and is about 10 miles north of Portland. The first recent summer record on Sauvie Island may have been in 1989, and 15 to 20 cranes have spent late spring/early summer there at least since the early 2000s. A few cranes have also been reported summering in the Oregon coast range, as far south as Coos Bay in recent years.

In Washington, a few Canadian sandhill cranes have been observed at the Ridgefield National Wildlife Refuge in Clark County during the summer, including two adult pairs during 2020. At least one of these pairs nested, and a “colt” (a crane chick) was observed but not seen on later visits. The two pairs may represent the re-occupancy of historical range by Canadian sandhill cranes that breed along the coast of British Columbia and the Alaska panhandle, and historically may have nested as far south as Oregon. The 2020 nesting is the first documented nesting of sandhill cranes in western Washington for more than 100 years. Reduced human visitation and trail closures associated with COVID restrictions may have been factors, lessening disturbance to the cranes.

The greater sandhill crane formerly nested at numerous sites throughout eastern Washington, and it was extirpated for about 30 years. These cranes currently breed at about six locations in Klickitat and Yakima Counties. The breeding population in Washington numbers only about 40 pairs but has been slowly increasing. More information about this subspecies is found on the greater sandhill crane species page.

Note: Greater sandhill cranes (Grus canadensis tabida) are the only subspecies of sandhill crane occurring in Washington that WDFW lists and manages as a Species of Greatest Conservation Need.

Sandhill cranes require wetlands for nesting and some feeding, and prefer open water with little emergent vegetation for roosting. They are sensitive to drought, low flows, or flooding that decrease available nesting, foraging, or roosting habitat. Sandhill cranes appear to have low physiological sensitivity to changes in climate, but little information currently exists on this topic. See the more information about the threats posed by climate change to sandhill cranes. Climate vulnerability is a way to assess the degree to which a habitat or species is susceptible to, and unable to cope with adverse impacts of climate change.