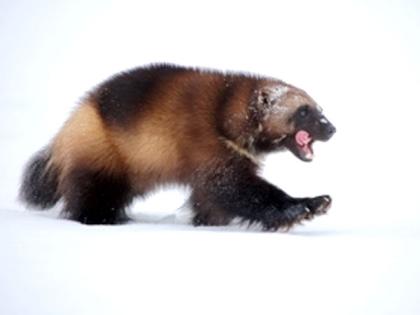 Washington's wolverine population occurs throughout the Cascade Mountain Range and appears to be connected to the population in southern British Columbia. The loss and fragmentation of habitat due to climate change is considered the greatest threat to wolverines in Washington. Vehicle collision (1 known in last 20 years) and predation may also be important sources of mortality.

The wolverine is the largest terrestrial member of the weasel family, with females weighing 18 to 27 pounds and males weighing 26 to 44 pounds. Wolverines are stocky with short, rounded ears, small eyes, a bushy tail, and large feet that are useful for travelling through snow. Their fur is dark brown, but has tawny colored bands that run down both sides of its body to its tail.

For an animal of their size, wolverines use extraordinarily large activity areas (from 40 to greater than 770 square miles).

Denning sites are commonly located in north and northeastern facing cirque habitats, where snow commonly persists through the spring and into the summer months.  Dens are typically associated with a passage through deep snow to a space within talus or under a fallen tree or other large woody debris.

Wolverines are prey generalists, and commonly feed on small and mid-sized mammals and ungulate carrion. They may opportunistically kill adult ungulates.

Predators include gray wolves, cougars, and other wolverines.

Wolverines occur in the remote mountainous areas of the Cascades and in northeastern Washington.  In the Cascade Range, wolverines occupy high-elevation landscapes from North Cascades National Park and Okanogan-Wenatchee National Forest south to Mount Adams on the Gifford Pinchot National Forest.  A population of 13 wolverines was studied in the North Cascades from 2005 to 2013  Wolverines were extirpated from Washington in the mid-1900s as a result of predator control and persecution, however they became reestablished in the North Cascades beginning in the 1990s and in the South Cascades (i.e., south of Interstate 90) by 2008.

Reproduction has been documented in Northern Cascades since 2005, and litters of wolverine kits were photographed in the vicinity of Mount Rainier National Park in 2018 and 2020. The population in the Cascades is probably less than 25 individuals, however this population appears to be relatively stable.

For maps of range-wide distribution and conservation status of this species check out NatureServe Explorer and the International Union for Conservation of Nature Redlist.

Wolverines exhibit sensitivity to temperature and declines in snowpack. The species is obligatorily associated with persistent spring snow cover, which provides critical thermal advantages such as predator refugia for denning females and young, preventing competition with other scavengers, and important prey caching/refrigeration areas. Temperature appears to play a role in fine-scale habitat selection and may affect prey caching success. Warming temperatures and declines in snowpack could lead to decreased habitat patch size, quality, and connectivity; reduced success of caching/refrigeration of carrion prey with subsequent impacts on survivorship and recruitment; limited den sites and/or loss of thermal refugia important for juvenile survival; and reduced dispersal abilities. Because wolverines are adapted to cooler temperatures, animals in the southern portions of the species’ geographic range (e.g., Washington) may experience greater physiological stress as summer temperatures increase in the coming decades.