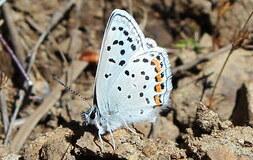 The population size of Straits acmon blue is considered a segregate of the more widespread Icaricia acmon. This segregate is limited in distribution along the Strait of Juan de Fuca. It in Washington is critical and is considered to have a declining trend. This lycaenid butterfly is recognized as a "Species of Greatest Conservation Need" due to its rare and restricted hostplants [food for caterpillars (larvae)] and habitat types, small number of isolated populations, highly limited range and distribution, and threats to its habitat.

Research is needed on this species to understand its life history and quantify specific habitat requirements including vegetation structure, food plant size and density, and key habitat features.

This acmon blue segregate is restricted to a few coastal sand spits and beaches along the southern shores of the Straits of Juan de Fuca, in Clallam County, where it uses the semi-shrubby, prostrate, black knotweed (Polygonum paronychia) for its host. Beyond their host need and sand spit and beach occurrence, little is known of their habitat requirements.

This lycaenid butterfly has two generations per year (spring and late summer). All lycaenids are sedentary butterflies and do not migrate; instead, the species inhabits sites year-round (as egg, larva, pupa and adult), typically moving within only a few hundred yards of their natal locations. Adults emerge from their chrysalids (pupae) during species-specific time periods; the Straits acmon blue’s adult period is May through June and August.

The Straits acmon blue’s primary nectar plant is unknown. Both males and females feed by using their long proboscis to sip floral nectar. Males of most species require salts, which they obtain from evaporated puddles and moist soil and animal urine and feces.

Male lycaenids seek mates using patrolling patterned flight or perching on vegetation in select spots and darting out to inspect passing butterflies. Females search for egg-laying sites by slowly flying and hovering above hostplant vegetation, and then landing and crawling to inspect vegetation before depositing eggs singly.

Larvae are slug-like in appearance and highly camouflaged in their host species. Many lycaenid larvae engage in mutualistic relationships with ants, known as myrmecophily, which typically consists of ants tending and milking larvae, obtaining nutrition in the form of a nectar-like substance (honeydew) in the process, and also protecting larvae from predators and parasitoids; in some situations, the ants move butterfly larvae or pupae into ground chambers, including their nests. The overwintering stage varies by lycaenid species: this stage unknown for Straits acmon blue.

The range of the Straits acmon blue is restricted to its coastal habitat along the Straits of Juan de Fuca in Clallam County, Washington. The distribution of this species is limited in part by a combination of their dependence on rare hostplant occurrence within rare habitat types. Its distribution and abundance in Washington is characterized by small numbers of small isolated populations.

For a map of range-wide conservation status and distribution of Icaricia acmon species, check out NatureServe Explorer.