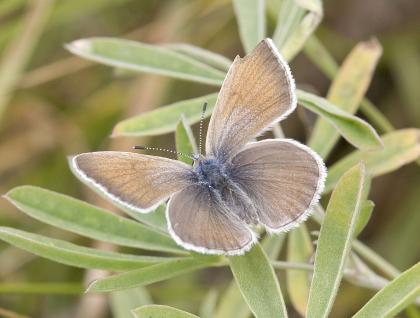 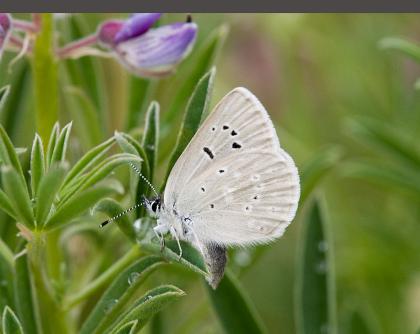 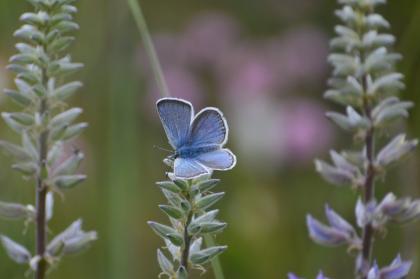 The population of the Puget blue  in Washington is low and is considered to have a declining trend. This lycaenid butterfly species is recognized as a state "Species of Greatest Conservation Need" due to its rare and restricted hostplants [food for caterpillars (larvae)] and habitat types, small number of isolated populations, highly limited range and distribution, and threats to its habitat.

Research is needed on this species to understand its life history and quantify specific habitat requirements including vegetation structure, food plant size and density, and key habitat features.

The Lycaenidae butterfly family consists of small and often brightly colored species with the common names: copper, hairstreak, elfin, and blue. The upperside of the wings of the male Puget blue is blue but is brownish on the female. The underside of the hind wing of each has indistinct black spots with fuzzy white halos; typically some spots are only white halos.

The Puget blue inhabits low elevation grasslands (prairies) in south Puget Sound, and sub-alpine meadows in the Olympic Mountains. The perennial sickle-keeled lupine (Lupinus albicaulis), a herbaceous plant, is the larval host and primary adult nectar source for the Puget blue on two south Sound prairies. The butterfly’s dependence on sickle-keeled lupine limits their habitat to areas and sites that support significant patches of this plant. Broadleaf lupine (L. latifolius) is also a primary nectar plant. Density of host lupine across two Puget blue varied between years and sites from 0.08 to 0.48 plants per square yard.

Another important habitat feature is bare ground depressions where water collects and evaporates during the adult flight period; males rely on these sites to obtain minerals (puddling). There have been no studies of habitat requirements for sub-alpine Olympic Mountain Puget blue populations.

This lycaenid butterfly completes a single life cycle annually (univoltine). All lycaenids are sedentary butterflies and do not migrate; instead, the species inhabits sites year-round (as egg, larva, pupa and adult), typically moving within only a few hundred yards of their natal locations. Adults emerge from their chrysalids (pupae) during species-specific time periods; the Puget blue’s adult period is June through July.

Both males and females feed by using their long proboscis to sip floral nectar.

Larvae are slug-like in appearance and highly camouflaged in their host species. Many lycaenid larvae engage in mutualistic relationships with ants, known as myrmecophily, which typically consists of ants tending and milking larvae, obtaining nutrition in the form of a nectar-like substance (honeydew) in the process, and also protecting larvae from predators and parasitoids; in some situations, the ants move butterfly larvae or pupae into ground chambers, including their nests. The overwintering stage varies by lycaenid species: Puget blue overwinter as larvae.

The distribution of the Puget blue is limited in part by a combination of its dependence on rare hostplant occurrence within rare habitat types. In Washington, its distribution and abundance in Washington is characterized by small numbers of small, isolated populations. The species' overall range is south Vancouver Island in British Columbia and eastern Olympic Mountain range and south Puget Sound region in Washington; occurrence has been documented in Clallam, Grays Harbor, Jefferson, Mason, Pierce and Thurston counties.

For a range-wide map of conservation status and distribution of Puget blue, check out NatureServe Explorer.

Sensitivity of this species is mainly driven by habitat. Populations associated with alpine meadows in the Olympic Mountains are likely very sensitive to climate-driven changes in habitat availability, as alpine habitats are projected to decline in extent due to warming temperatures, reduced snowpack, drought, and other drivers. Populations associated with lower elevation prairies are likely sensitive to fire. Lupine, the larval host plant of the Puget blue as well as an adult nectar source, appears to thrive post-fire, and fire also helps prevent prairie succession to forest or shrub habitats. However, fire can also lead to direct mortality of Puget blue adults and larvae, and/or facilitate the expansion of scotch broom and other invasive plants, which can displace lupine. In addition, it is unknown how shifting fire regimes (e.g., seasonality, intensity) will impact this species and its host plant.