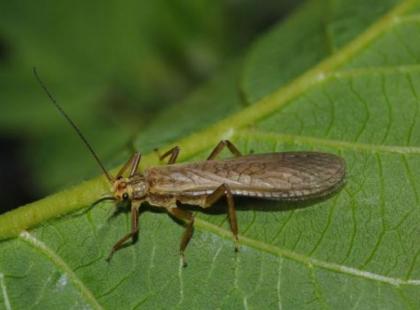 This is not a northern forestfly but is an example of a stonefly species (Soliperla sierra).  (B. Stark) 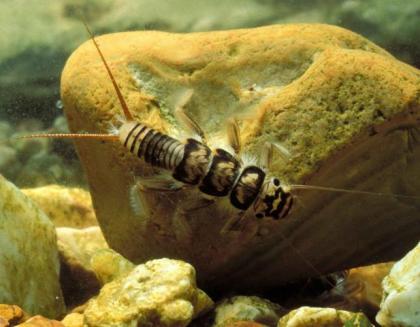 The population size of northern forestfly is low in Washington and the trend is unknown. This species is endemic to the state. They are in the Plecoptera order of insects, commonly known as stoneflies. Stoneflies generally require cold, clear, running water, and they are excellent indicators of water quality. An estimated 43 percent of North American stoneflies are vulnerable to extinction, imperiled, or extinct.

Adult northern forestflies are small--about 1/4 to 3/8 inches long. Adult stoneflies have two sets of clear, fine-veined wings that lay close to the body. These insects have long, thin antennae. The larvae (nymphs) look like wingless adults, but often have external gills, which may be present on almost any part of the body. Depending on the species, stonefly nymphs range in size from ½ to 1 ½ inches in length not counting appendages.

Taxonomic note: The northern forestfly (Lednia borealis) was  described from specimens originally identified as L. tumana, a Candidate for listing under the federal Endangered Species Act.

The northern forestfly has been collected from springs draining into alpine lakes and creeks from alpine glaciers. Stoneflies usually live in areas with running water, and are important predators and shredders in aquatic ecosystems. Adults are terrestrial and can be found near aquatic habitats with running water, resting on rocks, debris, and vegetation. As nymphs, stoneflies live in aquatic habitats, mainly along the bottom of cool, clean, flowing waters with relatively high oxygen concentrations, mainly on rocky, stony, or gravel substrates.

The females lay hundreds or even thousands of eggs in a ball which they initially carry on their abdomens, and later deposit into the water. The eggs typically hatch in two to three weeks, but some species undergo diapause as eggs during the dry season. The nymphs physically resemble wingless adults, but often have external gills, which may be present on almost any part of the body. The nymphs (technically, "naiads") are aquatic and live in the benthic zone of well-oxygenated creeks and lakes.

In early stages (called instars), stoneflies tend to be herbivores or detritivores, feeding on plant material such as algae, leaves, and other fresh or decaying vegetation; in later instars, the nymphs of many species shift to being omnivores or carnivores, and some species become predators on other aquatic invertebrates.

The insects remain in the nymphal form for one to four years, depending on species, and undergo from 12 to 33 molts before emerging and becoming terrestrial as adults.

Stonefly adults are generally weak fliers and stay close to stream, river, or lake margins where the nymphs are likely to be found. The adults emerge only during specific times of the year and only survive one to four weeks.

As adults, very few stonefly species feed but those that do, feed on algae and lichens, nectar, or pollen.

The northern forestfly, a Washington endemic, is only known from high elevation glacial-fed streams in the Cascades, including Mt. Rainier and North Cascades National Parks, Alpine Lakes Wilderness, and Glacier Peak Wilderness in Mt. Baker-Snoqualmie National Forest. Specimens collected in central British Columbia may also be of this species.

The Northern forestfly is a species of stonefly with only a few currently known locations in the Cascades Mountains in Washington. It is associated with high-elevation springs and streams, and in fact all 3 species in the Lednia genus are restricted to alpine or subalpine springs and glacial streams (the proposed name for the genus is "Meltwater Stoneflies"). This species is extremely sensitive to climate change because of its dependence on coldwater habitats, which are likely to warm significantly along with disappearing glaciers.

US Fish and Wildlife Service (USFWS). 2011. Endangered and threatened wildlife and plants; 12-month finding on a petition to list the Bearmouth mountainsnail, Byrne Resort mountainsnail, and meltwater lednian stonefly as endangered or threatened. Federal Register 76(65): 18684-18701.