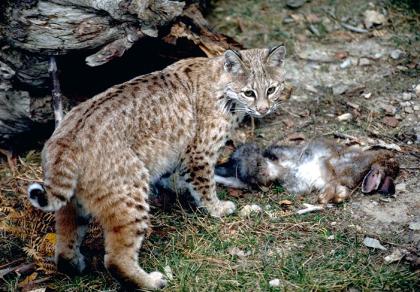 A bobcat hunches over a recent kill.
Category: Mammals

Found throughout all of Washington, bobcats are probably more common than most people realize. Bobcats appear to be using suburban settings more often, although due to their reclusive ways, they are not often seen.

Bobcats can be various shades of buff and brown, with dark brown or black stripes and spots on some parts of the body. The tip of the tail and the backs of the ears are black. They have short ear tufts, and ruffs of hair on the side of the head, giving the appearance of sideburns.

Adult male bobcats weigh 20 to 30 pounds and average 3 feet in length. Females are considerably smaller and may weigh less than a large house cat.

Bobcats of eastern Washington tend to be a much lighter buff color than those of western Washington. Both color phases occur along the eastern side of the Cascade Mountains.

Rock cliffs, outcroppings, and ledges are important to bobcats for shelter, raising young, and resting sites. Large brush or log piles and hollow trees or logs are used in wooded areas. Finding bobcats in open fields, meadows and agricultural areas is not uncommon, provided enough brushy or timbered areas for escape cover is nearby.

Because of their elusive nature and caution around humans, bobcats are seldom seen. In areas occupied by humans, these cats typically limit their activity to night hours. (In dim light, bobcats see up to six times better than humans.) In undisturbed areas, they can be active at dawn or dusk if prey is active at that time. However, bobcats may be active during any time of day.

Bobcats travel in predictable patterns along logging roads, railways, and trails made by other animals to move between resting areas, food sources, or hunting areas. Evidence of a bobcat’s presence may include tracks in snow or mud, droppings, feeding areas, and claw marks on tree trunks.

The bobcat track is easily distinguished with a round shape, four toes and no claws evident (Fig. 5). It is generally twice the size of a domestic cat's print and loosely resembles that of a coyote or dog but is more rounded. At greater speeds the toes of the front foot spread easier than that of the hind one which has a smaller ball pad. Fine muddy silt leaves the clearest tracks.

Bobcats generally cover their droppings with loose soil, snow, leaves or other material (Fig. 6). When visible, their droppings typically resemble those of most species in the dog and cat families.

A bobcat will eat the carcass of a large mammal. Like a cougar, it will cover the carcass remains and frequently return to feed on it. Being smaller than a cougar, a bobcat only reaches out 15 inches to rake up debris to cover the food cache. These marks, and the bobcat’s much smaller tracks, help distinguish between bobcat and cougar caches.

Like house cats scratching furniture, bobcats mark their territory boundaries by leaving claw marks on trees, stumps, and occasionally fence posts (Fig. 7). Bobcat claw marks are normally 2 to 3 feet above the ground; domestic cat scratching occurs at a height of about 1-1/2 to 2 feet.

Bobcats rarely vocalize, although they often yowl and hiss during the mating season, especially when competing males have intentions toward the same receptive female. Such wails have been likened to a child crying, a woman’s scream, and the screeching of someone in terrible pain.

Bobcats are not often responsible for killing domestic animals, but occasionally are responsible for losses of poultry, lambs, small goats, pigs, and house cats. Mostly, bobcats tend to use wild animals as prey items. Once a bobcat causes damage for the first time, it gets easier for the animal to do it again.

Where bobcats are deemed a problem, use the following management strategies around your property to prevent conflicts:

Prevent the buildup of feeder foods under bird feeders. Bobcats are attracted to the many birds and rodents that come to feeders.

Feed dogs and cats indoors and clean up after them. If you must feed outside, do so in the morning or midday, and pick up food and water bowls, as well as leftovers and spilled food as soon as pets have finished eating. Water, pet food and droppings attract small mammals that, in turn, attract bobcats.

Keep dogs and cats indoors, especially from dusk to dawn. Left outside at night, small dogs and cats may become prey for bobcats (which have attacked cocker-spaniel-size dogs).

Enclose poultry (chickens, ducks, and turkeys) in a secure outdoor pen and house. Bobcats will eat poultry if they can get to them. Note: Other killers of poultry include coyotes, foxes, skunks, raccoons, feral cats, dogs, opossums, weasels, hawks, and large owls.

If a dead bird is found with no apparent injuries, skinning it may determine what killed it. If the carcass is patterned by red spots where pointed teeth have bruised the flesh but not broken the skin, the bird was probably “played with” by one or more dogs until it died.

To prevent bobcats from accessing birds in their night roosts, equip poultry houses with well-fitted doors.

Bobcats can climb, so wooden fence posts or structures that give the bobcat footing and access to an otherwise unprotected pen will not be effective. Bobcats also have the ability to jump fences 6 feet or more in height. Use woven wire or a hot wire overhead if necessary.

Keep livestock and small animals that live outdoors confined in secure pens during periods of vulnerability. All animals should be confined from dusk to dawn. (Temporary or portable fencing keeps livestock together so that they can be guarded more effectively.) During birthing season, keep young and vulnerable animals confined at all times. Do not use remote pastures or holding areas, especially when there has been a recent bobcat attack. Remove any sick and injured animals immediately. Ensure that young animals have a healthy diet so that they are strong and less vulnerable to predators.

Livestock producers have discovered that scare devices, such as bright lights, motion detectors connected to recordings of barking dogs or radios will deter bobcats--until they realize that they aren’t life-threatening.

For a large property with livestock, consider using a guard animal. There are specialty breeds of dogs that can defend livestock. Donkeys and llamas have also successfully been used as guard animals. As with any guard animal, pros and cons exist. Purchase a guard animal from a reputable breeder who knows the animal he or she sells. Some breeders offer various guarantees on their guard animals, including a replacement if an animal fails to perform as expected.