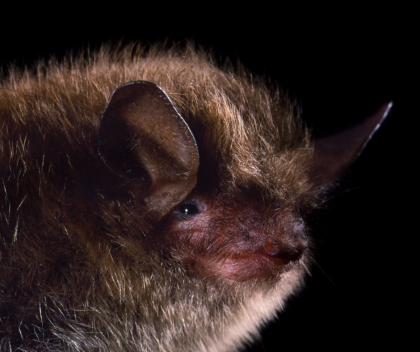 Little brown bats are small bats, but medium-sized among the species of Myotis in Washington. Their fur coloration is variable, with individuals in Washington ranging from yellow or olive to blackish, and their fur is usually longer and glossier than in other similar Myotis species. Underparts are noticeably paler. Ears and flight membranes are dark brown. Ears reach the tip of the nostril when pressed forward. The tragus is about half as long as the ear and blunt. The hind foot is relatively large, exceeding half the length of the tibia, and the calcar is not keeled.

Little brown myotis possess low wing loading, low aspect ratios, rounded wing tips, and high frequency echolocation, which give the species maneuverable flight and allow it to specialize on small insects. Foraging is often concentrated over or near water, but also occurs along forest edges, in forests, over lawns and streets, and in other cover types.  Feeding is most active during the 2-3 hours after dusk when insect activity often peaks. Most prey is captured in the air and consumed in flight. Nightly foraging movements usually range 1-14 kilometers from day roosts.

Reproduction
Mating mostly occurs in late summer and early autumn during swarming before hibernation and may continue into winter. Ovulation and pregnancy are delayed until after hibernation ends in spring, with gestation lasting 50-60 days. Females give birth to a single pup per year; twins are rare. Births probably occur earlier at lower elevations than at higher elevations. Births occur in June in western Washington, and may be substantially delayed or reduced in years with cooler wetter weather.

Roosting
Day roosting occurs in a variety of sites, including buildings and other structures, tree cavities and beneath bark, rock crevices, caves, and mines. Reproductive females usually live separately from males and non-reproductive females, forming maternity roosts at sites with warm (30-55°C) (86-131°F), stable temperatures that facilitate rapid development of the young. Nursery colonies contain anywhere from a dozen individuals to more than 1,000 bats. The largest known maternity roost of little brown myotis in Washington contains about 1,000 adults and roosts together with about 2,000 adult Yuma myotis under an abandoned railroad trestle near Olympia.

Buildings and bridges serve as night roosts for adults and juveniles of both sexes. Females often gather in clusters in night roosts. Greater use occurs on cooler nights, when bats are probably attracted to the warmer temperatures within roosts.

Hibernation
Hibernacula are poorly known in the West, but include caves, abandoned mines, and lava tubes. Hibernation generally occurs from September or October until March or April. Although winter roosts often contain thousands of individuals in other parts of North America, little brown myotis have thus far only been found hibernating singly or in small clusters in the Pacific Northwest. Hibernation has been confirmed in Washington.

Both sexes appear to hibernate together. Within hibernacula, microsites are preferred where humidity is high (70-95%) and temperatures remain above freezing (1-5°C, 33.8-41°F).  Hibernating individuals lose about 25% of their weight during winter, thus acquisition of sufficient fat reserves before hibernation is essential for overwinter survival.

The range of the little brown myotis extends across most of North America from the forested portions of Alaska and northern Canada southward to California, Colorado, and the southeastern United States. The species occurs throughout Washington.

This species is a habitat generalist that uses a broad range of ecosystems. In Washington and Oregon, it occurs most commonly in both conifer and hardwood forests, but also occupies open forests, forest margins, shrubsteppe, clumps of trees in open habitats, sites with cliffs, and urban areas. Within these habitats, riparian areas and sites with open water are usually preferred.  Elevations up to tree line are inhabited, with males being more common than females at higher elevations.