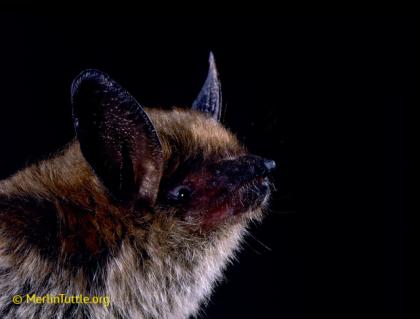 Fringed myotis are small bats, but one of the larger species of Myotis in Washington. Fur color ranges from yellowish brown to darker olive, with little discernible difference between the back and underparts except in Canada, where the back is pale brown and the undersides are paler. Ears and flight membranes are blackish. The outer edge of the tail membrane is lined with small stiff hairs that are visible to the naked eye, giving this species its common name. Ears are long and extend beyond the nose when pushed forward. The tragus is long and slender. The foot is large, about half the length of the tibia, and the calcar is not keeled.

Food habits and foraging
Fringed myotis feed on beetles, moths, flies, leafhoppers, lacewings, crickets, spiders, harvestmen, and other invertebrates. Presence of flightless insects in the diet indicates that some prey are gleaned from foliage. Analyses of stomach contents indicate that the main prey include moths, arachnids, leaf and plant hoppers, and beetles in western Oregon and moths and leafhoppers in eastern Oregon. The slow and highly maneuverable flight of this species is well suited to both aerial capture and gleaning of prey from foliage. This, together with the type of echolocation call, suggests that fringed myotis are adapted for foraging within forests and along forest edges. Foraging peaks one to two hours after sunset  Foraging sites averaged 1.6 km from day roosts in ponderosa pine forests in Washington and Oregon.

Reproduction
Mating occurs in the fall after maternity colonies dissolve. Ovulation, fertilization, and implantation are delayed until spring. Pregnancy lasts 50-60 days and is followed by the birth of a single young pup, usually between late June and early July.

This species ranges across much of western North America from south-central British Columbia to southern Mexico. In Washington, fringed myotis occur primarily east of the Cascade crest. Only a few confirmed records exist for western Washington, these being from Whatcom, Thurston, and Skamania counties. Fringed myotis inhabit a variety of plant communities including desert scrub, dry grasslands, shrubsteppe, drier forest, moist coastal coniferous forest, and riparian forest, but drier woodlands (e.g., oak, pinyon-juniper, and ponderosa pine) are often preferred. Access to water sources appears to be important. This species occurs from sea level to 2,850 meters, but is most common at middle elevations from 1,200 to 2,100 meters. In ponderosa pine forest in eastern Washington, it was more common in a lower elevation watershed (760 to 1,260 meters) than a somewhat higher watershed (1,000 to 1,400 meters). Other state records come from sites with a mix of riparian vegetation, shrubsteppe, and cliffs shrubsteppe, ponderosa pine, and cliffs. Males are more common than females at higher elevations in eastern Washington.

Roosting
Day roosts, including maternity colonies, occur in trees, snags, rock crevices, caves, mines, and buildings. In regions of dry climate, fringed myotis commonly prefer rock crevices as roosts. In other parts of its range, live trees and snags are used exclusively, especially those having larger diameters and heights and in the early to moderate stages of decay with exfoliating bark present. In parts of Eastern Washington, the three largest roosts, holding 14 to 118 bats, occurred in large ponderosa pine snags.

Maternity colonies form from about mid-April to September. Those in buildings can rarely exceed 1,000 animals. In contrast, nursery colonies in trees or rock crevices are much smaller. Day roosts with one to seven females have been reported for Washington. This species is known to use torpor while day roosting. Caves, mines, rock crevices, buildings, and bridges are used as night roosts. Individuals have been reported night roosting under bridges in Whatcom County and in caves in Skamania County.