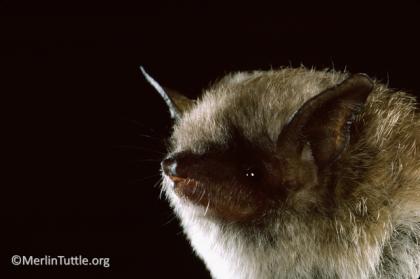 Yuma myotis and little brown myotis are similar in appearance and size, which can make identification difficult. Yuma myotis are small bats and one of the smaller species of Myotis in Washington. Of the two subspecies occurring in the state, M. y. saturatus has dark brown to chestnut fur and dark ears and wings, whereas M. y. sociabilis has pale yellowish or grayish-brown fur with pale ears and wings. The underparts are paler than the back in both subspecies. The ears are relatively short and reach the nostrils when pressed forward; the tragus is about half the length of the ear and blunt in shape. The calcar is not keeled.

This bat ranges from southeast Alaska and western Montana south to western Texas and central Mexico. Yuma myotis are widely distributed in Washington, with records existing for nearly all counties. Overall, Yuma myotis are considered common and ranks as one of the more common species at some sites in the Cascades, northeastern Washington, at Moses Coulee, on the Olympic Peninsula, and the lowlands of western Washington. In contrast, several surveys have found this species to be relatively uncommon or rare in eastern Washington.

Yuma myotis reside in moist and dry forests, riparian zones, grasslands, shrubsteppe, and deserts, and are closely associated with rivers, streams, ponds, and lakes. This species is generally found at lower elevations. Records extend up to 730 meters elevation in British Columbia but reach as high as 3,050 meters in other parts of the West.

Food habits and foraging
Fringed myotis feed on beetles, moths, flies, leafhoppers, lacewings, crickets, spiders, harvestmen, and other invertebrates. Presence of flightless insects in the diet indicates that some prey are gleaned from foliage. Analyses of stomach contents indicate that the main prey include moths, arachnids, leaf and plant hoppers, and beetles in western Oregon and moths and leafhoppers in eastern Oregon. The slow and highly maneuverable flight of this species is well suited to both aerial capture and gleaning of prey from foliage. This, together with the type of echolocation call, suggests that fringed myotis are adapted for foraging within forests and along forest edges. Foraging peaks one to two hours after sunset. Foraging sites averaged 1.6 km from day roosts in ponderosa pine forests in Washington and Oregon.

Reproduction
Mating occurs in autumn prior to hibernation. Ovulation and fertilization are delayed until spring and females give birth to a single pup. Births occur primarily in the first two weeks of June to at least late June in western and eastern Washington. Births may be substantially delayed or reduced in years with cooler wetter weather.

Roosting
Buildings, bridges, cliff crevices, caves, mines, and trees are used as summer day roosts, especially when located near water. Maternity colonies occupy buildings, caves, mines, and the undersides of train trestles and piers. In the Pacific Northwest, large maternity colonies in buildings and other human-made structures appear to contain more individuals (1,500-4,100 adults than those in caves and mines (500-750 adults). Nursery roosts are commonly shared with other species, especially little brown myotis. The largest known colonies of Yuma myotis in Washington are located at Hanford (4,100 adults); in Whitman County (2,300 adults); near Olympia (about 2,000 adults); and in Lincoln County (1,500 adults). Dates of occupancy at two of these colonies extend from early April to late October at Hanford and from late April to late August near Olympia. A nursery colony with 1,100 adult female Yuma myotis in three adjoining bat houses in San Juan County is also noteworthy.

Ambient air temperatures in nurseries can reach up to 40ºC (104ºF) in buildings, but only 14-20ºC (57-68ºF) in mines. By roosting in clusters in domed areas of mines, bats can raise the temperature of these sites substantially above ambient (e.g., up to 37ºC [99ºF]), thereby reducing thermoregulatory costs.

Tree roosting individuals prefer large living conifer and hardwood trees in areas with high forest cover near water. Night roosts have been found on porches, in buildings, and under bridges. Concrete bridges are favored over other bridge types. Adult females show strong fidelity to the same night roost in subsequent years.

Hibernating
Winter roost selection is poorly known in the Pacific Northwest. Hibernating Yuma myotis have been found in caves in coastal Washington, in lava tubes in Skamania County, and a former underground water storage structure at Hanford. Hibernation occurs from late October or early November until March in eastern Washington.