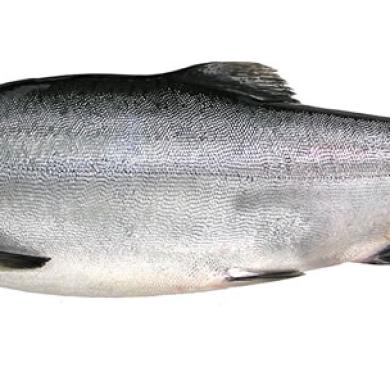 Male pink salmon develop a large hump on their back during spawning, hence the nickname humpback salmon. This is the smallest of the fall-spawning Pacific salmon. In Washington, pink salmon runs only occur in odd-numbered years.

Spawning
Pinks use the mainstems of large rivers and some tributaries, often very close to saltwater. Because their fry move directly to sea after emerging, the closer they spawn to saltwater the better. The shorter journey reduces predation and increases survival. Sometimes pink salmon spawn right in saltwater, avoiding freshwater altogether.

Pinks have a very regular life history, living for two years before returning to spawn the next generation. This is why pink runs in Washington only occur every other year; there are no one-year-old or three-year-old fish to establish runs in the other years.

Rearing
As mentioned, pink fry do not rear in freshwater. Immediately after emerging they move downstream to the estuary and rear there for several months before heading out to the open ocean. Because of this, pink fry have no spots, which provide camouflage in streams, but are bright chrome for open water.