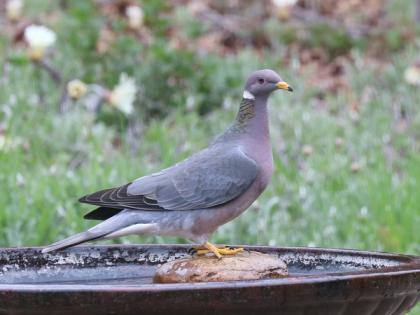 The Pacific Coast band-tailed pigeon is managed as a migratory game bird in Washington. Its population is low due to a combination of factors that led to very restrictive hunting regulations since 1990 in the Pacific Coast states and closing the season in Washington from 1991 to 2001. For current rules, be sure to check WDFW Migratory Waterfowl and Upland Game Seasons and Regulations.

The Pacific Coast band-tailed pigeon is about 15 inches in length. Its head and breast are purplish. It is soft bluish-gray above and has a gray tail band. Its bill is yellow with a dark tip, and its legs and feet are yellow. Adults have a thin, white band on their nape. The bird’s call is a low-pitched ‘hoo-hoo’.

This pigeon is reliant on upland forests and limited mineral sources in western Washington. Habitats have been influenced by timber harvest and management of clearcuts that reduce food resources.

Food resources include berry- and nut-producing trees and shrubs such as cascara, elderberry, wild cherry, huckleberry, and madrone. Band-tailed pigeons seek a mineral supplement to their diet of berries which contains few minerals. Mineral sites are important to the species because these provide needed sodium (and possibly calcium) during the nesting season.

The species is site-faithful to breeding areas, which are usually in proximity to mineral sources, but band-tailed pigeon flocks can be nomadic depending on food availability. Band-tailed pigeons nest primarily in conifers, occasionally in hardwoods and shrubs, within closed canopy conifer, or mixed hardwood and conifer forests. Band-tailed pigeons are presumably monogamous, and most clutches have one egg; however, some pairs may nest up to three times a year depending on weather conditions.

In some years, the protozoan Trichomoniasis gallinae contributes to increased mortality of band-tailed pigeons and is passed directly from one bird to another through food, water, and other means.

In Washington, band-tailed pigeons are found primarily west of the Cascades during spring and summer; they are known to occur in Klickitat and Yakima counties east of the Cascades. The size of Washington’s breeding population is unknown.

Direct population estimates of Pacific Coast band-tailed pigeons are extremely difficult to obtain because of poor visibility and inaccessibility at use sites. The North American Breeding Bird Survey results indicate that the trend since 1968 has decreased 1.2 percent per year (1968 to 2019). Results of the Mineral Site Survey, coordinated by the U.S. Fish and Wildlife Service since 2004 shows abundance has increased since 2010. Less than 40 mineral sites used by band-tailed pigeons have been identified in Washington, and many are in private ownership without protection from loss or degradation.

For worldwide distribution of this species and other species' information, check out NatureServe Explorer and the International Union for Conservation of Nature Red List.

Very little information exists regarding sensitivity of band-tailed pigeons to climate change. In general, this species may exhibit some sensitivity due to habitat requirements. Warmer temperatures and changes in precipitation that lead to declines in water levels may adversely affect this species. Similarly, altered fire regimes that lead to loss of forested habitat could negatively impact the species.

For current rules, be sure to check WDFW Migratory Waterfowl and Upland Game Seasons and Regulations.

The WDFW conducts annual mineral spring surveys to track long-term population trends for band-tailed pigeons. Surveys are conducted usually between mid- to late July. The U.S. Fish and Wildlife Service Pacific Flyway Council uses this information to determine the length of the hunting season and bag limits for the entire Pacific Coast population.

During late spring of 2020, WDFW biologists began a project designed to track pigeon movements and use of select mineral springs. Mineral springs provide important minerals for pigeon digestion. Biologists captured and banded a total of 16 birds in coastal Washington. Birds received a federal band plus a colored/numbered band. Newly identified springs will be added to existing sites for monitoring along coastal and interior portions of the Olympic Peninsula. Future plans for this project include capturing additional pigeons, equipping them with GPS transmitters, and identifying their migration timing and winter use areas.