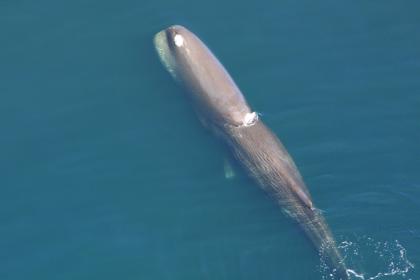 The sperm whale is the largest species of toothed whale and are found in all deep oceans. Commercial whaling decimated populations in the 19th and 20th centuries. Most of the sperm whales in Washington coastal waters belong to the California/Oregon/Washington Stock, which has approximately two thousand whales, and is still recovering. Ship strikes, fisheries entanglements, marine debris, human-generated marine sound, and climate change may negatively affect recovery.

Sperm whales are the largest of the toothed whales. They tend to be uniformly dark gray and wrinkled, with a small rounded dorsal fin. Their large heads can comprise nearly one-third of their total body length. Females may weigh about 15 tons and be 35 feet in length. Males may weigh about 45 tons and reach 52 feet.

Sperm whales do not undertake predictable seasonal migrations, although there is a general trend among animals at midlatitudes to move poleward during summer and return during winter. The species generally prefers deep oceanic waters.

Densities are usually highest near productive waters, including near steep drop-offs or strong oceanographic features such as the edges of continental shelves, near offshore banks, and over submarine trenches and canyons. The species regularly forages at 2000 feet and can dive to 10,000 feet. Diet is primarily composed of medium to large squid, sharks, skates, and other fish.

Females reach sexual maturity at 7 to 11 years, whereas males may not breed until age 25. Single calves are produced every five to seven years. Births occur in warmer regions, with those in the northern hemisphere taking place in May to September.

Adult females, calves, and juveniles form groups of usually 20 to 40 animals. As males grow older, they join "bachelor schools" with other males of the same approximate size and age, but as they age they become more solitary. This species may live up to 60 years.

Sperm whales are distributed across the world's oceans from the tropics to higher latitudes. Females are generally found in warmer waters (greater than 60 degrees Fahrenheit) at latitudes lower than 40 degrees but may occur to 50 degrees latitude in the North Pacific. Adult males spend much of their time in colder waters near pack ice, but occasionally return to warmer regions to breed.

Global population sizes are not accurately known. Sperm whales are regularly present in deeper waters off the outer Washington coast in all seasons except winter. The California/Oregon/Washington stock is estimated to include about 2,000 animals.

Members from the North Pacific Stock which is estimated to include 26,000 to 32,000 individuals are also known to move through Washington’s waters.

For worldwide distribution and other species' information, check out NatureServe Explorer and the International Union for Conservation of Nature Red List.

Sperm whales occur throughout the world’s oceans and therefore may be somewhat resilient as a species to climate change. However, some stocks may be more affected than others. The most likely impacts to sperm whales involve changes in marine food webs, especially those causing reductions in squid, their main prey. Sperm whale abundance, distribution, and strandings have been linked to changes in the abundance of squid in several regions. Increasing ocean temperature and acidity and changes in ocean circulation are the most likely factors that will affect marine food chains. Given that male and female sperm whales tend of occupy different habitats and ranges (with females preferring warmer, more southerly waters and males having a broader range), male and female sperm whales may exhibit different levels of sensitivity. Males occurring in arctic regions may be affected by melting sea ice, which could increase the level of interactions with vessels, anthropogenic sound, and the risk of oil spills.