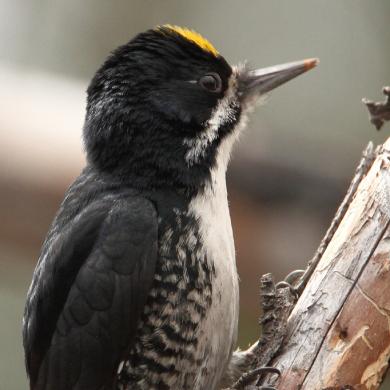 Black-backed woodpecker (Jim Cummins)
Category: Birds
State status: Candidate
If you see this species, please share your observation using the WDFW wildlife reporting tool or email us at  wildlife.data@dfw.wa.gov. Be sure to include a photo of the species for verification and location (latitude/longitude coordinates) of your observation.

The black-backed woodpecker inhabits the boreal forests of North America, including the Cascade Mountains, the northern portions of the Sierra Nevada and Rocky Mountains, Alaska, much of Canada, northern New England, and the upper Midwest. In Washington, it is found primarily in the eastern Cascade Mountains, northeastern Washington, and the Blue Mountains (Figure 2; Smith et al. 1997, Leach 2005). The species is rare to locally uncommon in mid- to high elevation conifer forests in eastern Washington and rare west of the Cascade crest (Leach 2005).

The species strongly prefers burns that have not been salvaged logged. Individuals were most common at sites with the highest level of snag retention (15-32 snags/ac) in salvage-logged stands in the Washington Cascades (Haggard and Gaines 2001). Birds did not nest in stands with low densities of retained snags (0-5 snags/ac). In burned ponderosa pine/Douglas-fir forest in southwestern Idaho, Saab and Dudley (1998) noted that black-backed woodpeckers favored units that had not been salvage-logged, and nest sites were typically in unlogged units with a relatively high density of small hard snags (>50 snags [>9”dbh]/ac).

Whether burns are essential for population persistence is uncertain. Black-backed woodpeckers also occur in beetle-ravaged forests (Bull et al. 1986, Bonnot et al. 2008) and in low numbers in unmanaged or mature forests (Bevis 1994, Leach 2005). Winter densities were twenty times higher in burned forest than unburned forest in northeastern Washington (Kreisel and Stein 1999). Little is known about black-backed woodpecker habitat needs and population dynamics in unburned forests. Several studies suggest that unburned forest is sink habitat, where the species persists due to emigration from recent burns (Hutto 1995, Murphy and Lehnhausen 1998). Frequency of fire within the dispersal range of individuals may therefore be a key determinant in species presence (Murphy and Lehnhausen 1998). Very frequent or large fires, however, may be detrimental because they destroy too much secondary habitat. Bonnot et al. (2008) reported that nest success was similar in both beetle-killed forests and recently burned forests. In the absence of fires, bark beetles (Scolytidae), such as the mountain pine beetle (Dendroctonus ponderosae), become a regular part of the diet (Dixon and Saab 2000).

Black-backed woodpeckers excavate nests in the sapwood of trees, while weaker excavators (e.g., Williamson’s sapsucker, Sphrapicus thyroideus) excavate cavities in heartwood affected by fungal decay. Bull et al. (1986) suggested that black-backed woodpeckers often nest in pines because they have a thicker sapwood layer than other tree species of the same size.

Historical and recent fire management policies have negatively impacted black-backed woodpeckers by reducing the occurrence of large, high intensity wildfires that create optimal conditions for the species (Dixon and Saab 2000). Goggans et al. (1988) suggested that the traditional approach of managing cavity nesters by retaining a relatively small number of snags and green replacement trees in harvested forest stands may not maintain enough foraging substrate to sustain viable populations of black-backed woodpeckers. Kotliar et al. (2002) concluded that, in general, clearcut forests do not function as substitutes for burned forests.

Post-fire salvage logging is also detrimental to the species (Kotliar et al. 2002). Therefore, where salvage logging is planned, it is important to delay any work for the first five years after the fire (Hutto 1995, Dixon and Saab 2000). This span is critical in providing habitat because the woodpecker’s primary food source (wood-boring beetles) becomes less abundant after this period (Caton 1996). Hutto and Gallo (2006) concluded that reduced woodpecker density in post-fire salvage-logged areas is more related to the reduction in food (wood boring beetles) than nest-site availability.

In May 2012, the U.S. Fish and Wildlife Service was petitioned to list blackbacked woodpecker populations in the Sierra Nevada, Oregon Cascades, and Black Hills of South Dakota and Wyoming (USFWS 2013). These populations are isolated from the remainder of the species’ range. The petition did not include the population in Washington, which may be contiguous with populations in Canada.