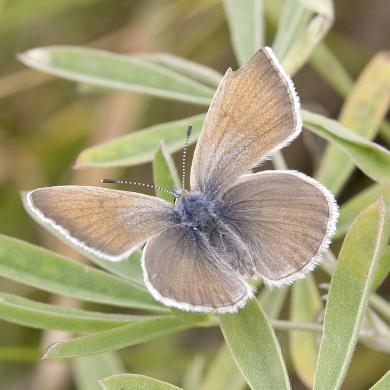 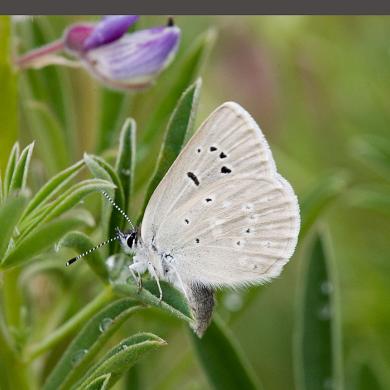 An adult Puget blue. (Rod Gilbert)
Category: Butterflies and moths
Ecosystems: Westside prairie
State status: Candidate
If you see this species, please share your observation using the WDFW wildlife reporting tool or email us at  wildlife.data@dfw.wa.gov. Be sure to include a photo of the species for verification and location (latitude/longitude coordinates) of your observation.

Sensitivity of this species is mainly driven by habitat. Populations associated with alpine meadows in the Olympic Mountains are likely very sensitive to climate-driven changes in habitat availability, as alpine habitats are projected to decline in extent due to warming temperatures, reduced snowpack, drought, and other drivers. Populations associated with lower elevation prairies are likely sensitive to fire. Lupine, the larval host plant of the Puget blue as well as an adult nectar source, appears to thrive post-fire, and fire also helps prevent prairie succession to forest or shrub habitats. However, fire can also lead to direct mortality of Puget blue adults and larvae, and/or facilitate the expansion of scotch broom and other invasive plants, which can displace lupine. In addition, it is unknown how shifting fire regimes (e.g., seasonality, intensity) will impact this species and its host plant.