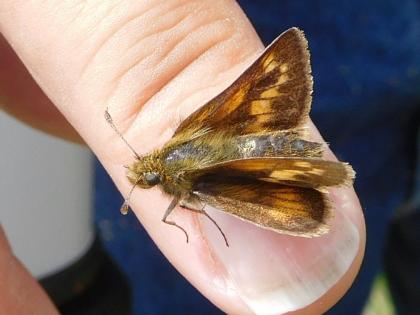 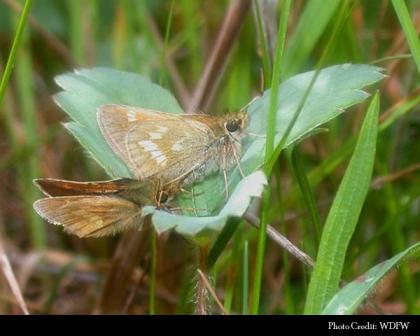 The mardon skipper population size is low and declining. This skipper is currently found at only four, small, geographically disjunct areas in Washington, Oregon, and California. It is one of five butterflies in the Skipper Family recognized as "Species of Greatest Conservation Need" throughout their ranges due to the small number of isolated populations, specialized and restricted habitat, and known threats to their habitat. Research is needed to better understand threat factors and specific habitat requirements, such as vegetation structure, food plant size and density, and other key habitat features.

The mardon skipper is a small, tawny-orange butterfly with a stout, hairy body..

In the southeastern Cascade Mountains, mardon skippers are found in meadows in an otherwise forested landscape; a variety of grasses and sedges are used for egg-laying (and larval hosts) and females select for large, well developed plants. The historical and ongoing loss of montane meadow habitat is well-documented.

These skippers complete a single life cycle annually (univoltine).They are sedentary butterflies and do not migrate; instead, the species inhabits sites year-round (as egg, larva, pupa and adult), typically moving within only a few hundred meters of their natal locations.

Male skippers seek mates by perching on low vegetation and then darting out to inspect passing butterflies. Males that detect females commence courtship behavior; when males detect another male they engage in a territory defense behavior of tight, upward spiraling flight.

Females search for egg-laying sites by slowly flying and hovering just above hostplant vegetation and then depositing single eggs.

Adults emerge from their chrysalids (pupae) during May through June. Males begin emergence first, followed by females; late-season individuals are primarily or solely females. Weather influences butterfly emergence and the flight period duration, with wet or cold conditions delaying emergence.

Both males and females feed by using their long proboscis to sip floral nectar.

For a map of range-wide distribution and conservation status of the mardon skipper, check out NatureServe Explorer.

Takaoka, S., and F. Swanson. 2008. Change in extent of meadows and shrub fields in the central western Cascade Range, Oregon. The Professional Geographer 60:527-540.