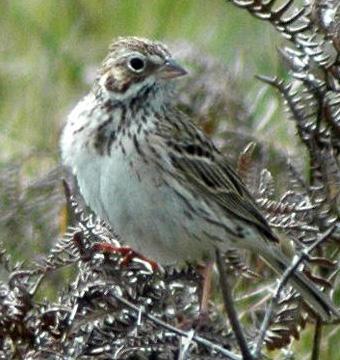 The Oregon vesper sparrow is a subspecies of vesper sparrow. It has a restricted breeding range that includes southwestern British Columbia, western Washington, western Oregon, and northwestern California. Oregon vesper sparrows are present in western Washington primarily from early April through late September, and they migrate to winter in central and southern California. Due to loss and degradation of habitat, risk of stochastic events, and disturbances during the nesting season, this subspecies is now in danger of extirpation in Washington.

A mix of bare ground and short vegetation is chosen for foraging, moderate structured vegetation for nesting, and scattered taller vegetation, including shrubs and scattered trees, is used for cover and singing perches. Fence posts, fences and other man-made structures are often used for singing perches. Prairie size also appears to be an important factor in site selection, with only large prairies currently occupied.

Adults take dust-baths in sandy forest roads, ruts in the road, and bare spots under vegetation, and seek out shade during mid-day.

Vesper sparrows eat a wide variety of insects during the breeding season supplemented with seeds during migration and winter. They primarily forage while walking on the ground but will also hop and hover to feed. Adults provide nestlings with invertebrates and rarely seeds.

Vesper sparrows build a bulky, loose, cup-like nest of grasses and rootlets on the ground in a small depression, often near the base of a grass clump, weed, or shrub. The female typically lays three to five eggs in mid-May and incubates them for 11 to 13 days. The young fledge in 7 to 12 days, and pairs commonly raise two broods per season. Vesper sparrows exhibit relatively high annual site fidelity to nesting areas and defend small territories during the breeding season.

Vesper sparrows migrate in flocks of 30 or fewer.

Vesper sparrows occupy open habitats (grassland, shrub-steppe, and agriculture) across much of central and southern North America. The Oregon vesper sparrow is the rarest of four recognized subspecies. It has a restricted breeding range that includes southwestern British Columbia, western Washington, western Oregon, and northwestern California. It is migratory and overwinters rom central California west of the Sierra Nevada Mountains to northwestern Baja California, Mexico.

Historical accounts suggest the Oregon vesper sparrow was locally uncommon to abundant in the disjunct distribution of grassland and savannah habitat in western Washington. It has experienced range-wide population declines and range contractions, and many local extirpations. In Washington, this includes 20th century extirpations from Vashon Island of the north Puget lowlands, and the Dungeness area of the Olympic Peninsula; and extirpation from San Juan Island appears likely. It is now mainly limited in Washington to remnant prairies and grasslands in Pierce and Thurston Counties, with smaller numbers on islands in the lower Columbia River and grasslands on San Juan Island; a few may still breed in eastern Clallam County and near Shelton (Mason County).

Approximately 90% of the population occurs in the south Puget lowlands, predominantly on Joint Base Lewis-McChord. The current range-wide population estimate is less than 3,000 birds with approximately 300 of those occurring in Washington.

Oregon vesper sparrow sensitivity is largely driven by their dependence on open habitats, seeds, and insects. They nest and forage on the ground in open habitats (e.g., grasslands or shrublands with patchy vegetation and some bare ground); increasing fire frequency, temperatures, and more variable precipitation may decrease habitat availability, quality and connectivity and/or alter foraging opportunities. They may have some physiological sensitivity; for example, low temperatures can undermine nestling growth by increasing thermoregulatory costs and/or decreasing insect prey availability.

Altman, B. 2011. Historical and current distribution and populations of bird species in Prairie-Oak habitats in the Pacific Northwest. Northwest Science 85:194-222.