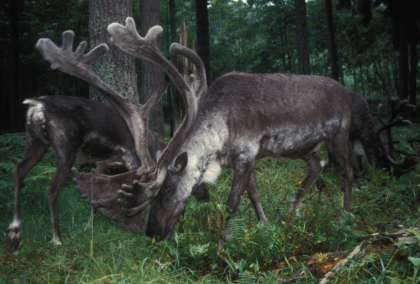 The southern mountain caribou distinct population segment is listed as federal endangered and, in Washington, the South Selkirk subpopulation of southern mountain caribou is listed as state endangered. The small size of the South Selkirk subpopulation increased its risk of extirpation, which was complete when the last surviving member was relocated to a pen enclosure near Revelstoke, British Columbia.

This population had been adversely affected by predation, logging, and roads. The core range for this population, which overlapped into Washington, was in British Columbia. The population declined from a recent high of 46 in 2009, mainly due to predation which had increased because past timber harvest had created habitat for deer, elk, and moose in their range. These animals attracted wolves, cougars, and bears that then occasionally killed caribou. Logging roads and snowmobile traffic likely facilitated greater access for predators to high elevation caribou habitat.

Caribou are the only species in the deer family (Cervidae) in which females regularly have antlers; females shed them from May to June, and males shed from November to April. Woodland caribou measure 3.6 to 4.6 feet tall at the shoulder. Males weigh 350 to 500 pounds, while females weigh 240 to 330 pounds. Body coloration is dark brown, contrasting with a whitish neck, shoulders and rump, and overall coloration becomes paler during the winter and spring. Caribou also have large, rounded hooves and large, widely-separated dew claws that allow them to cross deep snow and wetlands.

The South Selkirk caribou herd was among several herds of southern mountain caribou that inhabit rugged mountainous regions with old-growth forests of Engelmann spruce/subalpine fir and western red cedar/western hemlock that are generally more than 100 to 150 years old. These forests support abundant arboreal lichens on which caribou forage. Tracts of old-growth spruce and western red-cedar/western hemlock on moderate slopes are critical early-winter habitats. Most woodland caribou move to lower elevations in early winter and re-ascend in late winter. In spring, they again descend to lower elevations, and then in summer move back up to the mountains as the snowpack disappears.

Southern mountain caribou are distinguished from other woodland caribou by a diet of almost exclusively arboreal lichens during the coldest six months of the year. This trait allowed them to inhabit the deep snow areas in the Selkirk Mountains above 4,000 feet. At other times of the year, diet consists of dried grasses, sedges, huckleberry leaves, willow and dwarf birch tips, and arboreal lichens.

Most female caribou do not breed until 2.5 years old. Rutting activity occurs from late September to late October, when dominant males defend small groups of 6 to 10 females and calves. Single calves, are born from late May to early July. They are able to stand and follow their mothers within 5 to 7 hours of birth. Young are typically born in isolated sites on high ridges.

Woodland caribou form relatively small herds of up to about 25 animals during late winter; small groups of two to five animals are typical during spring and summer.

Although robust caribou populations can withstand natural levels of predation, this was the primary factor that led to the final demise of the tiny South Selkirk herd. Past conversion of old-growth forests to younger stands brought higher densities of deer, moose, and elk and their predators (wolves, cougars, and bears) into closer proximity to herd members, resulting in greater predation risk to caribou.

Across their range, caribou are listed as vulnerable to endangered. Woodland caribou (Rangifer tarandus caribou), a subspecies of caribou, occur across the boreal regions of North America and are comprised of eight recognized populations. Most of the global population of woodland caribou occurs in the boreal forests of Canada.

The South Selkirk subpopulation occurred in the southern Selkirk Mountains of southeastern British Columbia, northeastern Washington (in Pend Oreille County), and northern Idaho. It was the only caribou herd that ranged into the contiguous United States in recent decades. This subpopulation was considered abundant and possibly numbered in the hundreds in the late 1800s but decreased to an estimated 25 to 100 caribou between 1925 and the mid-1980s. Numbers ranged between 33 and 51 animals from 1991 to 2009 despite being supplemented with 103 caribou in two separate multi-year translocations in the late 1980s and 1990s.

The South Selkirk subpopulation was isolated from neighboring subpopulations, with probably no immigration occurring in recent decades, and they rarely moved into Washington. Recently, the subpopulation declined rapidly from 46 caribou in 2009 to 3 in 2018, and the last one was captured and moved to a pen enclosure near Revelstoke in early 2019.

For range-wide conservation status of the woodland caribou and other species' information, check out NatureServe Explorer.