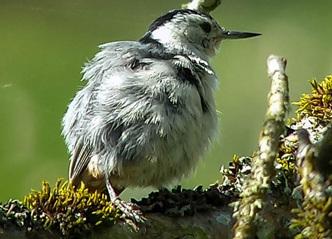 The population of slender-billed white-breasted nuthatch in Washington is critical and the trend points to it declining. The bird is a subspecies of white-breasted nuthatch, and is of concern due to its dependence on large, mature oak trees to provide nest cavities and food and the fragmentation of oak trees from agriculture and residential development.

This white-breasted nuthatch subspecies has a long, thin bill. The bird is a little over 5 inches in length. They have a black cap, gray body, white face and white breast with rust coloring below.

This subspecies appears to be dependent on oak and oak-conifer woodlands. In Washington and Oregon, they are commonly associated with Oregon white oak, as well as black cottonwood and Oregon ash. Nuthatch densities are greater in areas with higher numbers of large trees, which provide more surface area for foraging and have more natural cavities for nesting and roosting. Large open-grown oaks in woodlands with sparse understories are particularly important as habitat because these trees have more cavities and foraging substrate than oaks grown in densely vegetated habitats. Birds are therefore more abundant in smaller (less than 30 acres) woodland patches, which by definition have more edge, than in larger (greater than 62 acres) patches.

The slender-billed white-breasted nuthatch often uses naturally occurring cavities, including those made by woodpeckers, in living trees for roosting and nesting. Individuals use multiple cavities during the year.

Pairs establish territories of about 25 to 37 acres and occupy the same territories year-round.

Foraging typically occurs on the trunk and larger limbs of trees. Weevils and earwigs are important parts of the diet during breeding and post-breeding periods; they also feed on acorns during winter.

White-breasted nuthatches are a common small passerine of deciduous forest in much of North America. This subspecies formerly occurred from the Puget Trough south to Oregon. The northern extent of the distribution has contracted southward and the range is currently primarily limited to Clark and Cowlitz Counties where it is rare. The Washington population likely consists of fewer than 50 individuals.

This species likely has low physiological sensitivity to climate change, but little information is available. As a near-obligate of oak woodlands, this species is likely more sensitive to changes in mature oak woodland nesting and foraging habitat as a result of climate change. Snags and large, mature trees provide superior forage grounds and more space for nesting cavities, which are created by woodpeckers. Increased fire frequencies may help restore more open, mature oak habitat by reducing oak density and conifer encroachment. Fire and wind events may also create important edge openings preferred by this species. Temperature increases and precipitation changes may affect insect prey availability. Any reductions in oak habitat in response to climate change would likely negatively affect this species, for although they will nest in mixed deciduous-coniferous woodlands, past oak woodland loss has been associated with species extirpation from portions of Washington State (e.g., Puget Sound).