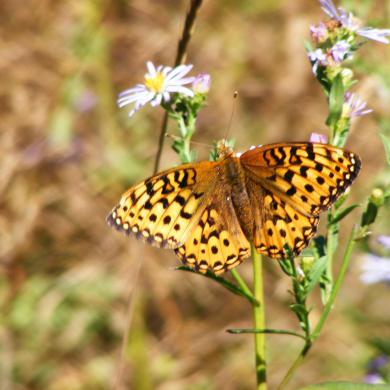 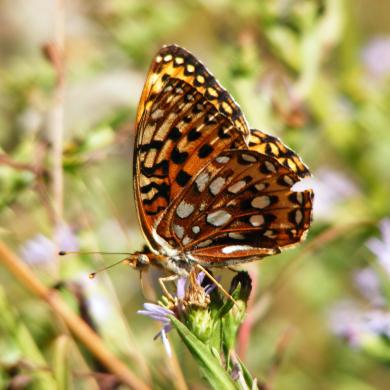 The population size of the valley silverspot is critical and has a declining trend. The butterfly is recognized as "Species of Greatest Conservation Need" (SGCN) in Washington along with 4 other fritillary butterflies due to their rare and restricted hostplants and habitat types, small number of isolated populations, limited range and distribution, and known threats to their habitats.

The valley silverspot is in the Heliconiinae (Fritillary) subfamily, which  consists of medium and large sized butterflies with distinctive black line and dot patterning on bright orange dorsally, and a heavily-patterned ventrum with silvery orbs (genus Speyeria: greater fritillaries) or muted colored triangles (genus Boloria: lesser fritillaries). Fritillary larvae are generally dark with many bristled spines, and feed nocturnally; these characteristics, along with a gland that secretes defensive chemicals, protect larvae from predators.

The valley silverspot is restricted to native grasslands in western Washington, primarily montane meadows in the northeastern Olympic Mountains, and low-elevation, short-stature grasslands in the south Puget Sound region. In a two-year study of valley silverspot habitat and nectar use on two south Puget Sound prairies, early blue violet was identified as a larval host, and two plants were selected for adult nectar sources (showy fleabane, [Erigeron speciosus] and Canada thistle [C. arvense]). There have been no hostplant or habitat studies in Olympic Mountain populations.

Like other greater fritillaries, the valley silverspot complete a single life cycle annually (univoltine). They are sedentary butterflies and do not migrate; instead, the species inhabits sites year-round (as egg, larva, pupa and adult). Adults emerge from their chrysalids (pupae) during species-specific time periods; typically early-to-late summer.

Both males and females feed by using their long proboscis to sip floral nectar. Research on other Speyeria species suggests that nectar availability affects the number of eggs laid by females.

These species depend on violets (genus Viola) for their hostplants. Speyeria fritillaries lay eggs late in the summer. A tiny larva hatches within a few weeks and seeks shelter to overwinter, but does not feed until the following spring.

The distribution of the valley silverspot is limited in part by their dependence on rare habitat types. Their distribution and abundance in Washington is characterized by low numbers of small isolated populations. Declines in both the number and size of populations have been documented for this species.

The species in Washington has been detected in the following counties: Clallam, Clark, Cowlitz, Jefferson, Lewis, Pierce, and Thurston.