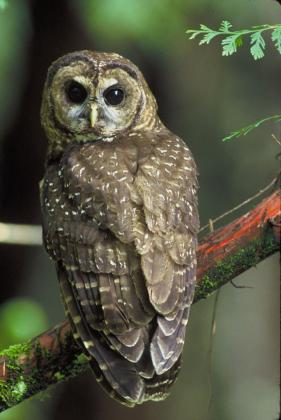 Impacts from habitat loss of mature forest are now worsened by the effects of competition with barred owls for prey and habitat. As the population declines and becomes even smaller, other threat factors may become more relevant.

Spotted owls are about 17 inches in length. They have large dark eyes, rounded heads, and are brown with white spotting overall. Spotted owls have a 4-note hoot. Physically, they may be confused with barred owls which are a few inches larger and have dark vertical barring on their light-colored breast. Barred owls also have a distinctive "who-cooks-for-you, who-cooks-for-you-all" call. Learn more about the differences between spotted owls and barred owls, hybridization, and gene research in this video.

The presence of mistletoe infection is important in the eastern Cascade Range.

Northern spotted owls have large home ranges, and in those areas they hunt a number of prey species. The most common prey are northern flying squirrels, but spotted owls will also prey on bushy-tailed woodrats, snowshoe hares, and other small mammals.

The northern spotted owl is relatively long-lived, has a long reproductive lifespan, invests significantly in parental care, and exhibits high adult survivorship. The majority of pairs do not breed every year. Courtship usually begins in February or March, and females typically lay eggs in late March or April.

Spotted owls are at a competitive disadvantage to the more generalist barred owl, which has expanded its range to now include the entire distribution of the northern spotted owl.

The population of northern spotted owls in Washington continues to decline, and some landscapes where long-term monitoring has been conducted now support several or fewer pairs. About 1,200 territories have been documented in Washington. Trend data suggests that about 25 percent or less of these territories remain occupied.

This species exhibits some sensitivity to increased temperatures both directly (i.e., physiologically) and indirectly through effects on prey availability. This species also exhibits some sensitivity to altered disturbance regimes (i.e., fire and insect outbreaks) that lead to habitat changes. For example, in the eastern Cascades in Oregon, high severity wildfire has reduced the number of spotted owl pairs in a USFS Ranger Unit. However, it appears that dense old forests may be relatively stable on the west-side of the Cascades, while more active management may help address fire risk in dry east-side forests.

See the Climate vulnerability section above for more information about the threats posed by climate change to this species.