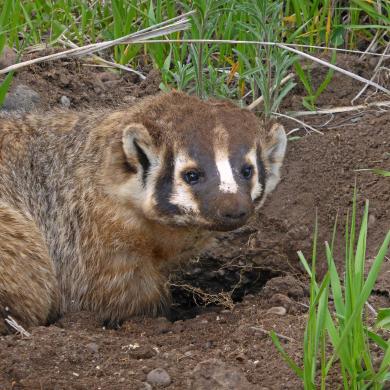 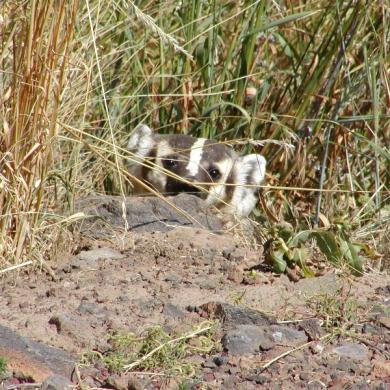 Population size of the American badger in Washington is unknown, but there is concern that the statewide population is declining.

The American badger is a mid-sized (10 to 11 pounds), burrowing mammal of the weasel family that uses underground burrows for resting, denning, and prey caching. They are well-suited for burrowing and digging: their bodies are flattened, with powerful, stocky legs, short ears, and a small pointed head. Their distinctly colored faces sport black patches over a white throat, chin, and cheeks.

The American badger is classified as a furbearing species in Washington, but few captures have been reported since 1995.

They are a solitary species, and use large home ranges that may overlap with other American badgers of either sex. Gray wolves, coyotes, bears, and cougars are reported predators of American badgers, but for many populations, anthropogenic (man-made) causes (vehicle collisions, illegal shooting, and trapping) appear to be a more significant source of mortality.

In springtime, female badgers give birth to litters ranging from one to five pups. The young badgers stay in their grass-lined den, nursing until 3 months of age. Juveniles may emerge from the den as early as 2 months but stay with their mother until 5 to 6 months old.

The current distribution of American badgers includes portions of eastern Washington from the eastern Cascade foothills to the Idaho border.

In general, sensitivity of the American badger appears to be mostly driven by prey and habitat specialization. Badgers occur in shrub-steppe, grassland, semi-desert, and open forest habitats, require friable soils for digging, and prey primarily on ground squirrels, pocket gophers, and a variety of other small mammals. Warmer, drier conditions that lead to more frequent and hotter fires and/or encourage the growth of invasive plants (e.g., cheatgrass) may degrade or alter natural habitat for badgers by negatively impacting some prey species (e.g., ground squirrels). However, warmer and drier conditions may also allow grassland and prey expansion, especially at higher elevations, thereby possibly creating more habitat for badgers. Based on these conditions, badgers may decline in the Columbia Basin, but increase in the east Cascades and other eastside mountainous areas.