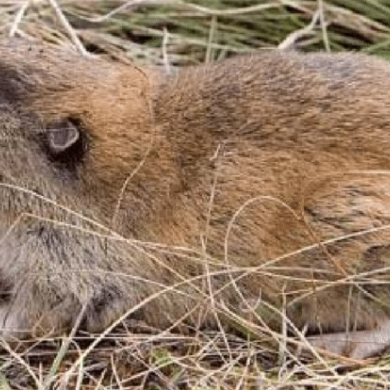 Subspecies
If you see this species, please share your observation using the WDFW wildlife reporting form. Providing detailed information such as a photo and exact coordinates will improve the confidence and value of this observation to WDFW species conservation and management.

In Washington, the Mazama pocket gopher is only found west of the Cascades -- in Thurston, Pierce, Mason, and Clallam counties.

The Mazama pocket gopher is one of the smallest of 35 species in the pocket gopher genus Thomomys. It ranges from 7 to 10 inches in length. It has reddish-brown fur with gray undersides. It has prominent incisors, large front claws, and cheek pouches (“pockets”). It differs from the similar-sized northern pocket gopher (Thomomys talpoides) of eastern Washington in fur color, tooth and skeletal characteristics, and a more conspicuous dark patch of fur behind their ears.

They are frequently confused with moles, but moles do not have prominent teeth, and the soil mounds that they leave behind are dome-shaped while the mounds left by gophers are often lower and more irregular or fan-shaped.

Pocket gophers are the only truly subterranean rodents in North America and are rarely observed above-ground, spending most of their time within their system of burrows. This species occurs in grasslands, including glacial outwash prairies, pastures, subalpine meadows, and occasionally clearcuts or Christmas tree farms. Requires well-drained soil for burrowing and appears to be most abundant in loamy sand soil types. It is absent from areas with clay soil or seasonal flooding.

Mazama pocket gophers are herbivores that require grasses and forbs for food. They eat a wide variety of roots and above-ground plant parts. Perennial forbs are preferred over grasses, and fleshy roots and bulbs, such as camas (Camasia spp.) are important when green vegetation is not available. Gophers also eat fungi and disseminate the spores of species that have an important role in facilitating plant growth.

They are generally territorial and solitary outside the reproductive season.

Mazama pocket gophers produce one litter per year, with an average litter size of five young. After weaning, female offspring often establish a burrow system nearby, but male offspring disperse.

Burrows include foraging tunnels and chambers for nesting and caching of food.

Though territorial, burrow systems are often aggregated in favorable habitat. Pocket gophers are ecologically important as prey items and in influencing soils and plant species diversity, and their burrows are a retreat for amphibians, reptiles, and many invertebrates.

Mazama pocket gophers occur in grasslands in Thurston, Pierce, and Mason Counties, and on a few alpine meadows in Olympic National Park. Washington has six described subspecies; three occur in Thurston County; and Pierce County, Mason County, and the Olympic Mountains each contain different subspecies. Two other subspecies, one near Tacoma and one in Wahkiakum County, appear to be extinct.

Historically, the species was more widespread on south Puget Sound prairies, but was reduced by habitat loss caused by development, agriculture, and succession or planting of trees and shrubs.

Population sizes for the different subspecies are unknown, but trends are declining for those in Thurston and Pierce Counties.

Other subspecies of Mazama pocket gopher occur in western Oregon and northern California.

For a map of this species' distribution and other information, check out the International Union for Conservation of Nature Red List.

Potential climate change impacts are much different for the Olympic Mountains subspecies, which inhabits small alpine meadows. These gophers are vulnerable to forest encroachment due to warmer temperatures and reduced snowpack, although increases in forest fires resulting from projected increased summer drying may benefit subalpine meadows by preventing conifer encroachment. This subspecies could also be vulnerable to increased predation by coyotes, which appear to be expanding to higher elevations in the Olympics in part because of warmer winters and lower snowpack.

The Mazama (Western) pocket gopher (Thomomys mazama) of Thurston, Pierce, Clark, and Mason Counties is state threatened and the subspecies in Thurston and Pierce counties were listed as Threatened under the U.S. Endangered Species Act in April 2014. Because only remnant populations of these subspecies and species exist, people are not permitted to use lethal control in these areas. Before moving forward with any type of control in these areas, contact your local state Fish and Wildlife office.