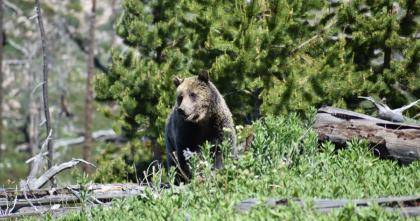 This omnivore is extirpated from most of the state; however, two populations of uncertain viability have been identified and each plays an important role in the range-wide conservation and recovery of the species. Grizzly populations in Washington are very small and isolated due to habitat fragmentation caused by human settlement and highways, which makes the species more vulnerable to inbreeding, wildfire, illegal harvest and other threats.

Grizzly bears are currently present in northeast Washington’s Selkirk Mountains, and are infrequently documented in areas near the Canadian border in northern Stevens and Ferry counties. They have not been confirmed in the Washington North Cascades since 1996, and are considered a state endangered species.

Due to the grizzly bears being a federally threatened and state-listed endangered species, killing one, either unintentionally or intentionally, can bring extremely costly fines and penalties. Mortality from hunters mistaking grizzly bears for black bears is a threat. Black bear hunters in Washington state must successfully complete the WDFW bear identification test or equivalent test from another state and carry proof of successful completion.

WDFW is the lead state agency tasked with supporting wildlife conservation and management in Washington. As grizzly bears remain listed under the federal Endangered Species Act, we coordinate closely with the U.S. Fish and Wildlife Service, other federal agencies, and land managers to support grizzly conservation, respond to any conflicts, and manage public safety concerns.

Grizzly bears can be distinguished from black bears by longer, curved claws, humped shoulders, and a face that appears concave. Grizzlies are often dark brown but can vary from blonde to nearly black. The long guard hairs on their backs and shoulders frequently have white tips and give the bears a grizzled appearance, hence the name “grizzly.”

For tips on bear identification and awareness, visit: igbconline.org/be-bear-aware/

Grizzly bears are found mostly in arctic tundra, alpine tundra, and subalpine mountain forests, but once occurred in a wider variety of habitats, including open prairie, brushlands, riparian woodlands, and semi-desert scrub. Most populations require huge areas of habitat remote from most human activity.

Young are born in a den, cave, crevice, hollow tree, hollow dug under rock, or similar site. Breeding occurs in late spring and early summer, and litter sizes range from one to four cubs, with an average of two. Young are born in winter and typically remain with the mother through two winters.

Although adult grizzly bears are normally solitary, home ranges frequently overlap, and they are not considered territorial. They are wide-ranging but may congregate in areas with abundant food. Grizzly bears are opportunistic omnivores with high diet variability among individuals, seasons, and years.

They generally enter dens in October or November for four to six months of hibernation.

Grizzly bears are long-lived and can reach up to 25 years of age.

Grizzly bears once occurred in most of Washington, but are now restricted to northeast Washington's Selkirk Mountains ecosystem and are occasionally documented in remote areas near the northern border of eastern Washington. Recent survey data indicates the Selkirk grizzly bear population is slowly increasing.

For a map of conservation status of the western population of grizzly bear and a map of global geographic range, see NatureServe Explorer and the International Union for Conservation of Nature Red List.

Grizzly bears are considered a highly adaptable species and are dietary generalists, feeding on a variety of food items, which may decrease the overall sensitivity of this species. However, where and how food sources change as a result of climate change could negatively impact food availability for the bears and could potentially exacerbate human/bear conflict and mortality. Additionally, warmer temperatures, delayed snowfall, and earlier snowmelt may alter the timing of den entry and exit related to hibernation, which could also increase the potential for human/bear conflicts in spring and fall. Altered fire regimes may remove important habitat, but could also open up new areas.

See the Climate vulnerability section for information about the threats posed by climate change to grizzly bear.

While seeing a grizzly bear in the wild is a memorable experience, your safety and the bear’s survival depends on you keeping your distance.

Carry bear spray and know how to use it: Carry your bear spray in a readily accessible location like in a belt holster, not in your backpack. If you do inadvertently encounter a bear, you should remain calm, move slowly, and attempt to leave the area immediately. If a bear charges you, responsible use of bear spray is the best way to deter an attack. Video by: Interagency Grizzly Bear Committee

Before you go:  Be sure you know about any special food storage regulations.

Pack smart: Avoid bringing smelly foods, like bacon or tuna, or scented toiletries. Dry, sealed foods are lighter and less aromatic. Bears have an excellent sense of smell, so bring at least 30 feet of rope, storage bags, and carabiners for hanging food. 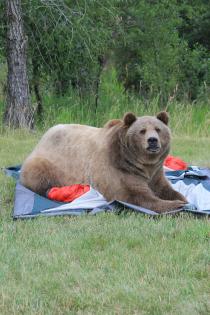 Use bear-resistant containers: A good method for storing food and other smelly items that attract bears, these containers can be purchased or rented from outdoor shops. Coolers, backpacks, wooden boxes, and tents are NOT bear resistant!

Be alert: Learn to recognize and watch for signs of bears in the area, like tracks, scat, and diggings. Use binoculars to scan the areas ahead. Bears often use the same trails hikers do and are attracted to sources of food like berry patches or carcasses.

Hike smart: Stick together in groups, rather than hiking alone. Groups of three or more hikers have rarely been injured by bears. Avoid hiking after dark, or at dawn or dusk, when bears are most active. Use extra caution in places where visibility or hearing is limited such as bushy areas near streams.

Alert bears to your presence: If a bear hears you coming, it will usually avoid you. Make a habit of talking, singing, blowing a whistle, or clapping your hands so that a bear knows you are in the area.

Camp smart: Avoid camping where there are signs that bears have been in the area, like scat and tracks. Do not leave food or other bear attractants in the open or in tents. Don’t burn or bury garbage – hang it at least 10 feet off the ground and four feet out, or store it in a bear-resistant container. Cook at least 100 yards from your sleeping area, and do not sleep in clothes you wore while cooking or eating.

View and photograph all wildlife from a distance: You should never come closer than 100 yards to a bear. Never approach a bear, even if it looks calm. Use binoculars or a telephoto lens for close-ups.

If you go fishing: Don’t leave fish entrails on shorelines of lakes and streams; sink them in deep water. Failing to dispose of entrails increases the danger to yourself and others using the area after you. Refer to camp smart section for cooking information.

If you do find yourself in close range to a grizzly bear follow these steps:

Wakkinen, W. L., and. 2004. Demographics and population trends of grizzly bears in the Cabinet–Yaak and Selkirk Ecosystems of British Columbia, Idaho, Montana, and Washington. Ursus 15:65-75.