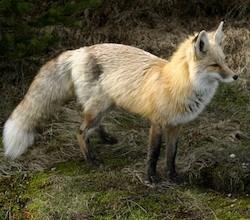 The Cascade red fox is a Washington endemic subspecies that occupies alpine and subalpine habitats in the southern Cascade Mountain Range.  Although there have been numerous surveys of habitats considered suitable for Cascades red foxes and a Cascade red fox was detected near Steven’s Pass (via DNA) in 2018, no resident population is currently known to exist north of the Interstate 90 corridor. Climate change could reduce the availability of habitat for this species.

The Cascade red fox is a subspecies of red fox. Cascade red foxes commonly occur in three color phases: red, cross, and silver/black. All three phases have been reported within a single litter of pups.

The Cascade red fox occurs only in alpine and subalpine habitats in montane environments of the Cascade Range in Washington. Subalpine meadows, parklands, and open forests are primary habitats. The species avoids wet, dense forests of the westside Cascades and tends to prefer the open, drier subalpine forests on the east side of the Cascade crest.

Seasonal home ranges for this species vary in size from one to four square miles.

These foxes are prey generalists and prey upon a variety of small and mid-sized mammals, insects, fruits, birds, and carrion. Pocket gophers, voles, and snowshoe hares are the most common mammalian prey.

The Cascade red fox is known to occupy the high elevation habitats of southern Cascades. Based on surveys and observations since 2005, there are concentrations of recent verifiable detections in the vicinity of Mt. Adams, Indian Heaven Wilderness Area, Goat Rocks Wilderness Area, and Mt. Rainer National Park.  Survey efforts in the North Cascades have not detected any populations of Cascade red foxes, however, a single Cascade red fox was detected near Steven’s Pass in 2018.

Overall population size and trend are unknown. Available evidence suggests that some subpopulations in the South Cascades may be small and/or isolated.

For worldwide distribution of Cascade red fox and other species' information, check out NatureServe Explorer.

The Cascade red fox is presumably adapted to colder climates and is restricted to subalpine parkland, high elevation meadows, and upper montane forest. The overall sensitivity of this subspecies to climate change is likely driven by its dependence on these colder, high elevation habitats. Warmer temperatures and reduced snowpack may negatively impact this subspecies by promoting forest encroachment into suitable parkland and meadows and/or facilitating movement of coyotes (a potential competitor and predator) into the range of Cascade red foxes. However, altered fire regimes and increased forest insect and tree disease outbreaks could benefit these foxes by reducing or preventing forest encroachment into high elevation open habitats.