Boat launches include Washington Park near the Anacortes Ferry Terminal and Cornet Bay Marina at Deception Pass State Park (be advised these launches can be very busy and parking is limited), as well as public and private marinas in Anacortes, Burrows Bay, La Conner, Bellingham, and Blaine.

Deception Pass and the San Juan Islands experience some of the strongest tidal currents on the West Coast. Depending on location, wind and tide direction, conditions can change quickly from calm seas to surging currents, tidally-influenced standing waves, or wind chop. Always review a local tide chart and weather forecast before hitting the water!

With hundreds of rocky islands, underwater reefs and pinnacles, the San Juans and Bellingham Bay provide exceptional fishing for lingcod and cabezon during the spring and early-summer months; check out this blog post for tips. Halibut are found on deeper underwater banks and sloping dropoffs, particularly in the Strait of Juan de Fuca and Strait of Georgia; visit this webpage for season details. The best fishing for these bottomfish species occurs around slack tides.

Shrimping can be very productive during spring and early-summer openers. Crabbing typically opens in mid- to late-summer through early-fall. Due to its rich biodiversity, Marine Area 7 is renowned for SCUBA and freediving, though visibility varies depending on outflow from rivers.

The San Juan Islands and nearby straits and bays provide numerous scenic locations to fish for Chinook salmon that are often teeming with baitfish given that Marine Area 7 sits at the confluence of several large bodies of water. Salmon fishing typically opens in July, however be aware that conservation concerns have limited fisheries in Marine Area 7 in recent years. Be sure to double-check current fishing regulations before heading out.

Schools of sockeye bound for the Fraser and Skagit rivers may also be found in July, though getting these salmon to bite can take very specific gear and tactics. Coho are found in late-summer and early-fall around the exterior of the San Juan Islands and in the open water of adjacent straits. During odd-numbered years pink salmon are abundant from mid-July into early-September, and are typically found in the same locations as coho. For those who don't have a boat big enough to make the run into the Islands or who want to save on fuel, consider fishing the more protected waters within Bellingham Bay or Rosario Strait near Anacortes.

Anglers who plan to fish for salmon in Canadian marine waters and return in their boats with their catch to Washington are required to notify WDFW before leaving state waters. 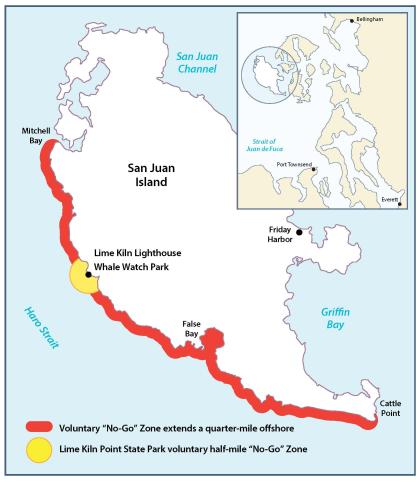 WDFW encourages avoiding waters extending a quarter-mile from shore from Mitchell Bay to Cattle Point except around Lime Kiln Point where the zone extends a half mile from shore. This "voluntary no-go zone" is intended to provide these endangered whales with a quiet area to feed.

To learn more, visit our killer whale conservation and management page or bewhalewise.org.

All marine waters north of the Trial Island line (described under Area 6) to the United States-Canada boundary.

Troll Hein Bank for Chinook or coho on the east side of the bank during the incoming tide or on the west side of the bank during the outgoing tide. Hein Bank is a popular location for halibut fishing in depths up to 300 feet of water. If fishing is slow, Middle Bank is located northeast of Hein Bank and can be a good location to target both halibut and Chinook. Currents can be strong in both the Middle and Hein Bank areas, so plan trips accordingly.

Chinook bound for Samish Hatchery and coho bound for Nooksack River and the Skookum Creek Hatchery pass through Bellingham Bay each summer and fall.  In Bellingham Bay, chum salmon return annually to the Nooksack River, Whatcom, Chuckanut, Squalicum, Oyster, and Padden creeks, while pink salmon return in odd-numbered years to Nooksack River and Whatcom creek. Fishing for chum is best in the tidewater area, particularly near the mouths of Whatcom and Chuckanut creeks and the Nooksack river. While pink salmon can be caught in the tidewater areas, they are often caught trolling, particularly in the northern extent of Bellingham Bay and off the islands in the western portion of the bay. Pinks can often be spotted jumping in schools near the surface in the northern extent of the bay. Remember to check regulations prior to fishing as rules for the Bellingham Bay fishery may differ to the rules in the rest of Marine Area 7.