This update provides an overview of gray wolf conservation and management activities in Washington during August 2022.

WDFW continues to support the Conflict on Workinglands Conservation Innovation Grant (CoW-CIG) research team’s evaluation of the effectiveness of range riding at reducing conflicts between livestock and carnivores. WDFW conflict staff have assisted with field coordination in trail camera deployment and data collection development. WDFW contracted range riders have also continued to collect data while in the field. As cattle come off the range in northeastern Washington this fall, researchers will be shaving tails of cattle to collect hair samples and measure cortisol levels.

Reports of remote camera images or videos, wolf tracks, or sightings from the public are extremely helpful in locating previously undocumented wolf activity and potential new packs on the landscape. Please take photos of wolves or wolf sign (use some way to measure the size of a track) and upload them to the wolf reporting page via the following link: https://wdfw.wa.gov/species-habitats/at-risk/species-recovery/gray-wolf/observations

Definitions: A “pack” is defined as two or more wolves traveling together in winter, and a “breeding pair” is defined as at least one adult male and one adult female wolf that raised at least two pups that survived until December 31. In any given year, the number of packs will always be greater than or equal to the number of breeding pairs. The known territories and more information for each pack can be viewed by clicking the pack name.

Beaver Creek pack
On Aug. 20, WDFW was informed that a wolf was killed on private property in Okanogan County in a “caught-in-the-act” scenario. WDFW law enforcement investigated the incident the same day. The livestock producer reported that three wolves had separated one steer away from other steers. The breeding female of the Beaver Creek pack was killed in this incident.

Dominion pack
No activity to report.

Grouse Flats pack
On Aug. 12, WDFW staff investigated a dead steer (approximately 850 lbs.) in a private pasture in Asotin County. The investigation revealed hemorrhaging on all four legs and the associated hide. The upper portions of all four legs had been consumed with hemorrhaging present on the remain flesh on both the tibia and radius on both the right and left sides. The location of the bite wounds and hemorrhaging are consistent with a wolf depredation event. Staff classified the incident as a confirmed wolf depredation attributed to the Grouse Flats pack. A Radio-Activated Guard (RAG) box had been triggered the day prior to the investigation and was located roughly 500 yards from the location of the carcass. The livestock producer agreed to remove the carcass.

On Aug. 30, WDFW staff investigated another dead steer (approximately 850 lbs.) in a different private pasture belonging to the same owner in Asotin County. The landowner reported that they had traveled the road less than 24 hours prior, and the carcass was not present. The initial investigation of the scene showed signs of a struggle with large areas of blood near the carcass. Several wolf tracks were located in the vicinity of the carcass. The investigation revealed hemorrhaging on all four legs and the associated hide. The hemorrhaging on the right front leg encompassed the entire shoulder and there were massive lacerations at the point of the elbow that punctured into the chest cavity.  The left front leg also had signature hemorrhaging on the inner and outer surfaces with the focus at the point of the elbow as well. The location of the bite wounds and hemorrhaging are consistent with a wolf depredation event. Staff classified the incident as a confirmed wolf depredation attributed to the Grouse Flats pack. The livestock producer agreed to remove the carcass.

The affected livestock producer proactively implemented range riding with cattle dogs, human presence, and Fox lights. Sick or injured livestock were removed from the pasture when found and carcasses were properly disposed of. After the first depredation, the producer moved cattle from the first affected pasture to one near an occupied dwelling to increase human presence.

Huckleberry pack
No activity to report.

Leadpoint pack
On Aug. 22, WDFW staff investigated a dead calf in a private pasture in Stevens County. The investigation revealed subcutaneous hemorrhaging on the left rear hindquarter and at the base of the tail. The front right quarter showed severe subcutaneous hemorrhaging with tissue damage extending through to the ribcage. Staff also identified lacerations in both rear hindquarters. Staff classified the incident as a confirmed wolf depredation attributed to the Leadpoint pack. Staff estimated the calf was killed less than 24 hours prior to the investigation. The carcass remains were removed and discarded at an appropriate sanitation facility. Staff also confirmed a second depredation attributed to the Leadpoint pack on Sept. 1.

Affected livestock producers utilize a Cattle Producers of Washington (CPoW) range rider and added a second rider on Sept. 2. Riders and producers aimed to keep cattle in the valley bottom and out of a treed area, and trees and brush were removed in an area wolves like to cross. Sick or injured livestock were removed from the pasture when found and carcasses were properly disposed of. WDFW staff deployed a RAG box and several Fox lights in the area where the two confirmed wolf depredation events occurred.

Lookout pack
No activity to report.

Navarre pack
No activity to report.

Salmo pack
No activity to report.

Sherman pack
No activity to report.

Skookum pack
No activity to report.

As reported on Sept. 8, WDFW staff lethally removed a juvenile male wolf while conducting lethal removal operations. It was unintentional to remove a wolf pup rather than an adult. Staff who saw the wolf evaluated it and based on their professional opinion thought it was an adult from a distance. Following removal, they saw it was a pup. As stated in the update, although this wolf was in the immediate proximity of and appeared to be traveling with members of the Smackout pack, based on the location of the removal and subsequent discovery of Dirty Shirt wolves in the area, it is not clear whether the wolf was traveling with the Smackout pack or the Dirty Shirt pack.

This type of field work is incredibly challenging. We do our best to carry out the objectives, but the nature of this work means there is some risk of removing a wolf that was not the focus of the field operation, as seen in this recent example. We understand how upsetting this news can be for engaged communities (as it is for WDFW staff).

WDFW funded the digging of two carcass sanitation pits (see photos below) for this operation to try to prevent wolves from frequenting the area to feed on carcasses. WDFW Wildlife Conflict Specialists and contracted range riders deployed turbofladry and Fox lights around the operation’s turnout pasture, and the livestock producer signed a cost-share agreement with WDFW to fund permanent fencing around the turnout and calving pastures. WDFW Wildlife Conflict Specialists and law enforcement will remain engaged with this operation to ensure proper carcass sanitation. 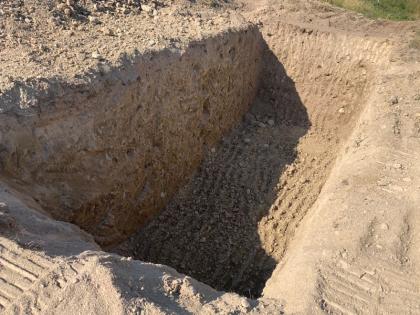 Teanaway pack
Biologists checked cameras in this pack territory in August to monitor the number of wolves.

Tucannon pack
No activity to report.

Vulcan pack
No activity to report.

Wedge pack
No activity to report.

As noted above, an adult female wolf belonging to the Beaver Creek pack was killed in a “caught-in-the-act” scenario in August. As reported on Sept. 8, WDFW staff lethally removed a juvenile male wolf while conducting lethal removal operations.

As of this update, in addition to mortalities under active investigation, WDFW has documented eight wolf mortalities in 2022.

Please report any suspected livestock depredations or the death or harassment of wolves to the WDFW Enforcement Hotline at 1-877-933-9847.

In 2021, 76% of known wolf packs were not involved in any documented livestock depredation.

Below is a summary of packs with documented depredation activity within the past ten months (some packs have depredation history prior to the current ten-month window; this timeframe is considered based on guidance from the wolf-livestock interaction protocol).

Packs referenced in this update