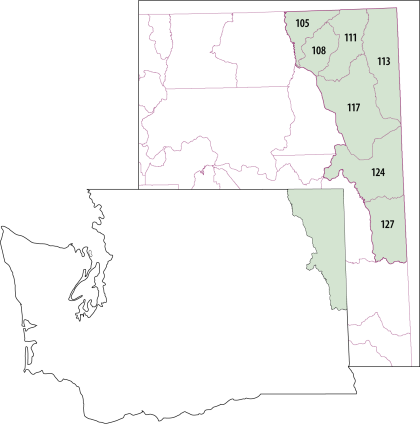 CWD is a fatal neurologic disease of cervids- deer, elk, and moose- caused by an infectious prion protein and transmitted from animal to animal or through contaminated environments. Most animals with CWD appear normal until the end stages of the disease when they show signs of weight loss, lethargy, drooping ears, excess salivation and urination, and loss of fear of people. There is no known cure for CWD.

CWD has not been detected in Washington, but has been in 27 states, most recently in Idaho, and 4 Canadian Provinces. Testing tissue samples collected from the head and neck of an animal from carcasses is the only way to determine if it is infected

If you harvest or salvage a road-killed deer, please contact WDFW at 509-892-1001 or email TeamSpokane@dfw.wa.gov if you would like your deer tested for CWD. You can also arrange sample collection with the Inland Northwest Wildlife Council (INWC) by calling 509-487-8552 to make arrangements to have it tested. Only the head of the animal is required for sampling.

You can look up your CWD test results by entering your WILD ID or Salvage Permit ID in the test results lookup tool.

Help prevent the spread of CWD

To prevent spreading prions that cause CWD, either field dress and leave all inedible parts of your harvested animal at the kill site or dispose of inedible parts in a licensed landfill. You can also double bag and place them in your household garbage.

If you harvest deer, elk, or moose outside Washington in states or provinces with CWD, by law (WAC 220-413-030), only the following items may be imported to Washington:

If you are notified by another state or provincial fish and wildlife agency that the animal you harvested tested positive for CWD, you have 24 hours to notify WDFW by calling 360-902-2515.

While there is no scientific evidence of CWD being transmitted to humans from animals, the Centers for Disease Control and Prevention recommends not consuming animals that test positive for CWD. WDFW advises hunters to:

Please help the Washington Department of Fish and Wildlife (WDFW) monitor the health of our deer, elk, and moose populations. While hunting or recreating, if you observe a sick or dead deer, please report it to your regional WDFW office or use this online reporting form.