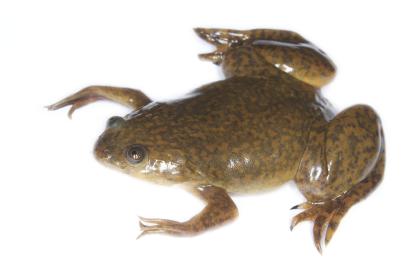 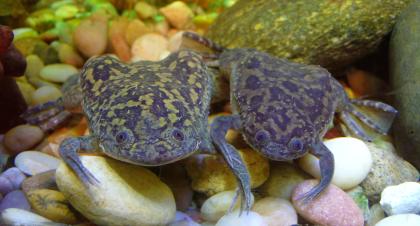 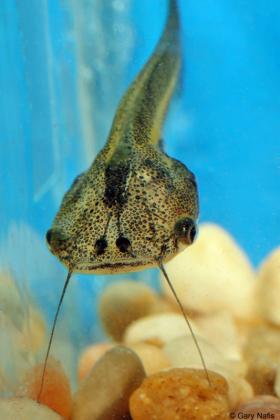 The African clawed frog is a semi-aquatic frog native to sub-Saharan Africa that readily acclimates to a wide range of habitats. These frogs can take over a habitat, and either out-compete or consume native species of frogs and fish. African clawed frogs are often carriers of diseases that are harmful to amphibians and fish. Their ability to rapidly reproduce and spread make them a significant conservation concern.

African clawed frogs were first identified in Washington in 2015 in King County and have since been confirmed in three cities in Puget Sound (Bothell, Issaquah, and Lacey).

Learn more about these invasive amphibians in this September 2021 blog post from WDFW staff.

African clawed frogs harm native ecosystems by competing with and preying on native species. They also have the potential to introduce harmful pathogens that hurt native fish and amphibian populations.

African clawed frogs have olive to brown skin, often with blotches or spots. These frogs do not have eye lids, tongues, or vocal sacs. Their front feet are unwebbed while their back feet are fully webbed and have black, sharp claws. Mature females average larger than males, growing to larger than an adult human fist. Larvae (tadpoles) look like a small catfish, and their most prominent feature is a pair of long thing barbels that extend from each side of their chin.

These frogs have a long life span, an extended breeding season, and are prolific reproducers. They are capable of surviving through severe drought and freezing conditions. Similar to bullfrogs, African clawed frogs will eat anything that will fit into their mouths including other frogs, fish, birds, and snails.

African clawed frogs are native to sub-Saharan Africa and were originally imported to the United States for laboratory use and as pets. Infestations of the species have been reported in California, Colorado, Arizona, Wisconsin and several states on the east coast.

After receiving reports from contractors, people fishing, and other community members, WDFW has confirmed African clawed frogs in three cities in Puget Sound since 2015: Bothell (King County); Issaquah (King County); and Lacey (Thurston County). However, there has not been any broad-scale systematic survey to identify additional populations around the state.

Although there is no direct evidence on how African clawed frogs have been introduced in Washington, the Department believes the frog populations were initially established from people dumping aquarium pets into ponds, which is a common practice with other aquatic invasive species. The distribution of the three known African clawed frog populations across the Puget Sound area suggests introductions were done by different individuals and that introductions may be more widespread that currently understood.

For more details on confirmed populations of African clawed frogs in Washington, refer to the African Clawed Frog Risk Assessment, Strategic Plan, and Past Management publication.