The Fish Component monitors species from Puget Sound, which are abundant, widely distributed, and economically and/or ecologically important. Various life history traits affect whether fish are exposed to and accumulate contaminants, including:

Much of the research on contaminant accumulation in fish in the Puget Sound has focused on English sole. These demersal fish are moderately long-lived1, have a close association with the bottom sediments, consume benthic invertebrates, and have relatively restricted movements associated with seasonal migration for reproduction. These characteristics suggest that their probability of exposure to persistent bioaccumulative toxins is moderately high and that they will reflect regional spatial patterns of contamination in bottom sediments. Also, because they are purchased from the commercial fishery and are captured and consumed by some anglers, English sole represent a food-web pathway through which contaminants can move from sediments to humans.

The Fish Component has monitored the presence and severity of toxic contaminants in this species annually from 1989 through 1999 and began bi-annual monitoring in 2001. Click for sampling locations.

1. Age of the oldest English sole collected by the Fish Component was estimated at 21 years.

Pacific herring are important prey to many species of Puget Sound fish, seabirds and marine mammals; consequently, their health is a good general indicator of the health of the Puget Sound ecosystem. As adults, herring are pelagic and wide-ranging, but with the onset of spawning, they move into the shallow near-shore habitat where they deposit their eggs on marine vegetation and other substrates. During an incubation period of about 14 days, the fertilized eggs could be exposed to contaminants through either direct contact with the sediments or by the water washing over them. After hatching, the pelagic larvae gradually move from the near-shore habitat to the open water column where they mature and spend the majority of their life.

Being planktivorous, larval and adult herring may be exposed to pollutants that are present in the water column and plankton. And because the muscle tissues of the adults are relatively high in lipids, they may readily accumulate lipophilic contaminants such as PCBs. In females, a portion of these lipophilic contaminants may be passed to the young along with the lipids used for egg development.

Historic studies by Fish and Wildlife have identified a number of discrete spawning stocks within South, Central and North Puget Sound. Examination of average contaminant exposure in the adult spawning stocks should reflect environmental contamination from the geographic areas in which these fish reside. Furthermore, because they are a short-lived species1, their contaminant loads reflect recent environmental conditions in their habitats.

The Fish Component completed a pilot study on contaminants in herring in 1995 and began annual baseline monitoring in 1999. Click for sampling locations.

1. Age of the oldest herring collected by the Fish Component were estimated at 6 years.

Chinook and coho salmon are anadromous species and throughout their lives may be exposed to contaminants in freshwater, estuarine, or marine areas. Although specific migratory patterns of these two species vary, they both spawn in freshwater, live there for 3 to 15 months after emergence as embryos from gravel nests, and then migrate to marine waters. Contaminant concentrations in prey they consume may vary in these habitats. In freshwater, the young salmon consume aquatic insects and crustaceans but as they smolt and enter the estuary they consume a wider variety of invertebrates and larval fish. Adult salmon in marine waters continue to eat invertebrates but consume more epipelagic1 fish, increasing the likelihood of contaminant biomagnification in their tissues. The amount of time each species or population spends at sea varies widely but for both species the majority of their growth occurs in marine waters before they return to their natal streams to spawn. Short-lived fish like coho and chinook2 salmon, reflect current environmental conditions in their habitats. 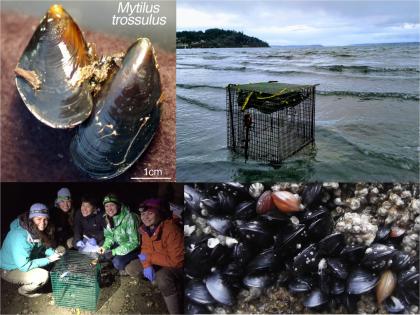 Mussels and other sessile, filter-feeding bivalves have been used to monitor contaminant conditions in nearshore biota since the late 1970s. Mussels are a commonly used biomonitoring species because of their wide geographical distribution, large populations, sessile nature, and high filtering rates. Additionally, they lack the ability to metabolize most of the organic contaminants they absorb, so they reflect the profile of bioavailable pollution in their local environments. They accumulate contaminants in their soft tissues via multiple pathways including ingestion/filtering of contaminated food, sediments, and water, thus integrating exposure from both the water column and benthic sources in the nearshore. As they retain contaminants for approximately two to four months their contaminant loads reflect recent exposure.

Our mussel monitoring program uses a clean aquaculture source of native bay mussels (Mytilus trossulus) that are transplanted to their monitoring locations in anti-predator cages. Advantages to using transplanted mussels instead of wild mussel populations include fewer limitations on study locations, a uniform starting population, a known exposure period, and the ability to measure and compare certain biological endpoints (growth, body condition, mortality).