Our Mission:  Assess the effects of toxic contaminants on marine and anadromous species to help guide efforts to protect fish and shellfish health, ensure seafood safety, and promote ecosystem recovery.

WDFW's TBiOS team monitors the geographic extent and magnitude of toxic contaminants in fish and other organisms living in Puget Sound, Washington's portion of the Salish Sea.  Our studies are designed to evaluate and track complex patterns of pollution across Puget Sound by using a number of indicator species representing a wide range of feeding strategies, movement patterns, and habitats.

We use data generated from these studies, some dating back to 1989, to evaluate the effects of these contaminants on the health of the Salish Sea's organisms.  Toxic chemicals covering a wide range of sources, toxicity, persistence, and bioaccumulation are measured to help us to understand where the problem areas are, and whether conditions are getting better or worse.  For more information, view a list of our publications and most recent results.

We also share our data with Washington's Department of Health to evaluate the safety of Salish Sea seafood for human consumption, and some data are used in the Puget Sound Partnership's Toxics in Fish Vital Sign to help track Puget Sound recovery.

Our TBiOS team is a key participant in the Puget Sound Ecosystem Monitoring Program (PSEMP), and we coordinate our research activities with our PSEMP partners tracking marine water quality and contaminants in Puget Sound sediments. TBiOS staff also work closely with our long-term research partners at NOAA Fisheries on a number of projects related to the health of the Puget Sound and the Salish Sea. 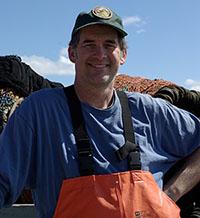 Jim West is a senior Research Scientist on the TBiOS team.  His work relates to how human activities affect the healthy function of Puget Sound's ecosystem.  His primary research is focused on toxic contaminants in the Sound's biota, in particular exposure patterns, effects on health, and long-term trends in these measures.  He has been with WDFW since 1990.  Jim has also studied artificial reefs, juvenile rockfish, drift algae habitats, rockfish growth and genetics, and Hawaiian reef fish communities.  He received his B.Sc. in Marine Biology from Southampton College, Long Island, NY in 1980, and his M.Sc. in Zoology from the University of Hawaii in 1985. 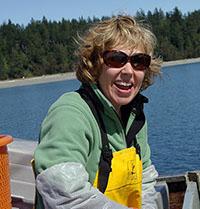 Sandie O'Neill is a senior research scientist.  The majority of her career has involved investigations of the health of the Puget Sound ecosystem, with a primary focus on the role of contaminants as a stressor on marine biota, including the influence of fish life history on contaminant accumulation, the flow of contaminants through the aquatic food web, and the effects of toxic substances on ecological and human health.  Additionally, Sandie has had an active role in identifying and selecting biophysical indicators of the condition of Puget Sound.  Sandie has worked for WDFW since 1987, except for a four-year assignment with National Marine Fisheries Service. She received her B.Sc. in Zoology from Memorial University of Newfoundland in 1981 and her M.Sc. in Zoology from the University of British Columbia in 1986. 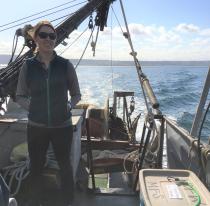 Andrea Carey is a fish and wildlife biologist who has been with the TBiOS team since 2012. Primarily, her work focuses on toxic contaminant exposure in Puget Sound’s biota. Prior to her work on the West Coast, Andrea studied the reproductive effects of contaminants in American eels. Andrea received her B.Sc. in biology in 2006 and her M.Sc. in marine biology in 2012, both from the University of Massachusetts – Dartmouth, in Dartmouth, Massachusetts. 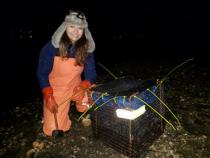 Mariko Langness is a biologist with the WDFW TBiOS team. Her work with the team began in 2015 and involves supporting monitoring programs to determine the extent and magnitude of toxic contaminants in marine and salmonid species living in Puget Sound and Washington’s Pacific coast. Her primary work is focused on conducting the Washington State Mussel Monitoring (aka Mussel Watch) program which performs a biennial survey to assess the status and trends of contaminants in nearshore biota using transplanted native bay mussels. Prior to her work with TBiOS, Mariko supported other nearshore marine ecosystem projects, including intertidal forage fish spawning surveys on the Washington Pacific coast and research on the ecological effects of geoduck aquaculture in Puget Sound. Mariko received her B.Sc. in Aquatic and Fishery Sciences from the University of Washington in 2008. 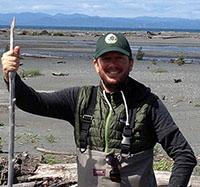 Robert J. Fisk is a fish and wildlife biologist who joined the TBiOS team in 2015. Rob conducts a wide range of research and monitoring studies to support TBiOS and Agency goals. In this capacity Rob plans, organizes and implements field and laboratory activities. Before joining TBiOS, Rob worked for the Washington Cooperative Fish and Wildlife Research Unit at the University of Washington. His work supported various graduate student research projects that focused on the effects of toxic contaminants on fish and wildlife. Rob received his B.Sc. in Aquatic and Fishery Sciences from the University of Washington in 2006. 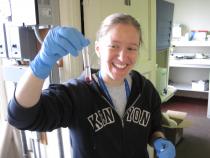 Louisa Harding is a Research Scientist who joined the TBiOS team in 2018. Her research involves using molecular tools (biomarkers) to monitor the impacts of toxic contaminants on the health of Puget Sound indicator species. A primary focus of this research is monitoring and understanding the response of fish to estrogenic contaminants and other endocrine disrupting chemicals in the environment. Prior to working at WDFW, Louisa’s research included reproductive physiology of coho salmon, endocrine disruption in juvenile salmon exposed to wastewater treatment plant effluent, and effects of stormwater runoff on forage fish embryo development. Louisa earned her B.A. in Biology and Dance from Kenyon College, Gambier, OH in 2006 and her Ph.D. in Aquatic and Fishery Sciences from University of Washington, Seattle in 2016. 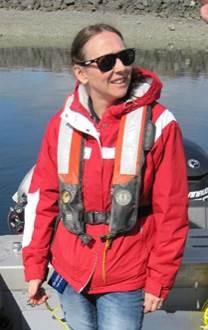 Danielle Nordstrom is a fish and wildlife biologist who has been with WDFW since 2016.  She first joined the agency within the Salmon and Steelhead Management team tracking commercial salmon and halibut catch data.  In 2017, she added to her duties by joining the TBiOS team to provide support to research studies and long-term monitoring for toxic contaminants in Puget Sound biota.  Danielle received her B.Sc. in 2015 from The Evergreen State College with an emphasis on marine biology and botany.  Since graduating, she has contributed to a variety of laboratory and fieldwork projects as well as environmental education and community outreach.