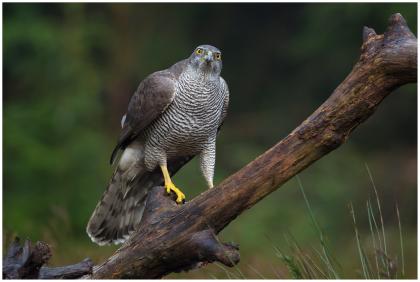 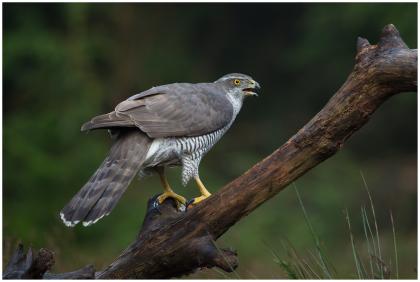 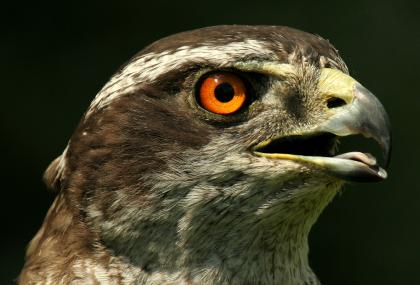 Immature northern goshawk (Wayne Dumbleton - Creative Commons)
Category: Birds
State status: Candidate
If you see this species, please share your observation using the WDFW wildlife reporting form. Providing detailed information such as a photo and exact coordinates will improve the confidence and value of this observation to WDFW species conservation and management.

Three subspecies of the goshawk are recognized in North America, but only the northern goshawk (A.g. atricapillus) is known in Washington. Northern goshawks can occur in all forested regions of Washington, mostly in late-seral stages.

Nicknamed “phantom of the forest” and “grey ghost”, goshawks hunt by stealth. They have evolved shorter wings and a longer tail to maneuver below canopy and through the forest.

Northern goshawks are accipiters, which are woodland raptors with long, dark-banded tails and relatively short, rounded wings. The goshawk's wingspan ranges from 40 to 46 inches. The body length is 21 to 26 inches. Adults have a dark charcoal cap and white eyebrows; their plumage is medium gray above, and a white underside with fine gray barring. Immature birds are brown above with white spotting on shoulders; their beige underside has dark brown, vertical streaking. Feet are yellow in both adult and immature birds.

The northern goshawk is found in northern continents, occupying a wide variety of boreal and montane forest habitats throughout Eurasia and North America.

Goshawks in Washington nest almost exclusively in coniferous forest, mostly late-seral stage, although a few nests have been found in aspen (Populus spp.) groves within the larger coniferous forest landscape in Okanogan County, Washington. Breeding goshawks generally occupy their nest sites from March until September; their nest area boundaries are determined by the movement and behavior of the adults and newly fledged young, and by the locations of prey plucking areas and roosts that are usually within the nest area.

Goshawks are considered opportunistic foragers, as exhibited by the wide range of prey taken in the United States. In Washington, Douglas' squirrel, grouse, and snowshoe hare were the most frequently represented prey species in the Cascade range, in Okanogan county, and in the Olympic Peninsula. In northeastern Washington and the Blue Mountains, the red squirrel replaces the Douglas’ squirrel as an important food item. Other prey also includes passerine birds, woodpeckers, and small mammals, such as chipmunks.

Northern goshawks can occur in all forested regions of Washington. As of 2003, there were 338 documented breeding territories in the state. The exact number is not known, because monitoring is not currently being conducted. The number of historical breeding sites lost due to habitat alteration and the number of new territories in suitable habitat are also unknown. Research has shown historic goshawk nesting sites were more likely to be occupied in landscapes (i.e., home ranges) dominated by larger uniform patches of forest in mature and late-seral stages.

About 50% of the documented breeding territories occur in the eastern Cascades, 27% in the western Cascades, 12% in other forested areas of northeast and southeast Washington, and 10% in the Olympic Peninsula. Less than 2% of recent breeding records have been recorded from southwest Washington (south of the Puget Sound and west to the coast). Breeding birds historically occurred in the Puget trough before extensive logging and development, but there are no modern records. Overall, densities of territorial pairs in Washington appear to be lower than elsewhere in the western United States but this is partly dependent on habitat quality.

Wintering goshawk populations in Washington include resident birds moving down from higher elevations and migrants that move into the state during winters when food shortages occur in their territories.

For a map of range-wide distribution and conservation status of the northern goshawk, check out NatureServe Explorer.

Falconry is the art of training raptors (birds of prey - falcons, eagles, hawks, and owls) to hunt in cooperation with a human and is the sport of actively pursuing wild quarry with those birds. The Washington Department of Fish and Wildlife issues falconry permits, regulates the sport, and remains in contact with the falconry community. No one under any circumstances may keep a raptor as a pet. Only licensed falconers may have birds of prey, and these birds must be flown freely and hunt regularly. State and federal regulations, expertise and dedication of falconers, and self-policing by the falconry community keep the birds in high-quality care. The impact of regulated falconry on wild raptor populations is thought to be minimal. Learn more about the history of this sport and the requirements for falconry in Washington.

Generally, the two most significant limiting factors to the long-term productivity and survival of the northern goshawk are the availability of suitable prey and nesting habitat. Although the effects of timber harvesting on goshawks in the United States are not fully understood, there is evidence to suggest that harvest impacts nest site selection, and potentially, nesting rates. As there are limited State regulatory procedures for goshawk nesting habitat retention in selected regions, local goshawk populations are likely to be negatively affected in landscapes where timber management is most intensive. Nesting goshawks appear to be largely absent from some extensive forested landscapes in western Washington that have been intensively managed on rotations less than or equal to 50 years. Fragmentation of nesting area habitat with the goshawk's home range potentially increases interaction with competing raptors (such as red-tailed hawks and great horned owls).