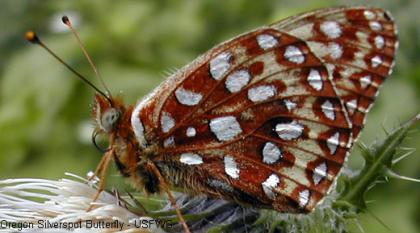 The Oregon silverspot butterfly is likely extirpated in Washington and will require reintroduction from captive reared or wild populations in Oregon. The butterfly is recognized as a "Species of Greatest Conservation Need" in Washington due to their rare and restricted hostplants and habitat types, small number of isolated populations, limited range and distribution, and known threats to their habitats.

Both males and females feed by using their long proboscis to sip floral nectar. Research on other Speyeria spp. suggests that nectar availability affects the number of eggs laid by females.

These species depend on violets (genus Viola) for their hostplants. Argynnis  fritillaries lay eggs late in the summer. A tiny larva hatches within a few weeks and seeks shelter to overwinter, but does not feed until the following spring.

Fritillary larvae are generally dark with many bristled spines, and feed nocturnally; these characteristics, along with a gland that secretes defensive chemicals, protect larvae from predators.

Today, all but 5 localities (one in California and 4 in Oregon) of this butterfly have been extirpated. The current overall range of this species is coastal Oregon and northern California.

See the Climate vulnerability section above for information about threats posed to the Oregon silverspot butterfly by climate change.