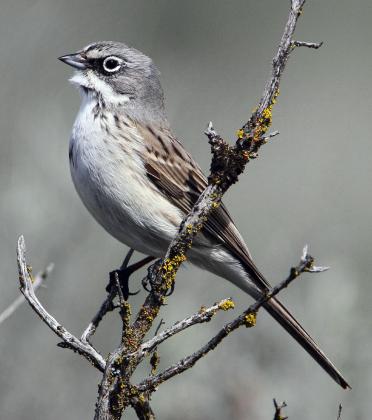 The population of sagebrush sparrow in Washington is low. The sparrow is a species of concern because large expanses of big sagebrush (Artemisia tridentata), its preferred habitat, have been lost or degraded.

The sagebrush sparrow is 5 to 6 inches in length. Males and females appear the same. They are generally brownish gray above, with their head being somewhat grayer and their back and wings being more brown. Sides and flanks are light, buffy gray, with dusky streaking. A white spot is in front of the eye, and there is a thin eye-ring. A horizontal white stripe is along the cheek. The underparts are mostly white, and there is a dark spot on the breast.

This is a sagebrush obligate species, typically associated with big sagebrush in eastern Washington. Sagebrush sparrows appear to be sensitive to patch size, and the probability they will use a site is higher in areas with large expanses of unconverted shrubsteppe, typically areas greater than 2,500 acres.

Pairs generally arrive together on breeding grounds. Males sing atop sagebrush in defense of their territory. Nest building in or under big sagebrush begins in mid-March. After an incubation period of 10 to 16 days, the young usually leave the nest 9 to 10 days after hatching. Most females raise two broods per year.

The sagebrush sparrow prefers the sagebrush/bunchgrass shrubsteppe landscapes of the Columbia Basin and is an uncommon migrant and summer resident in the shrubsteppe of eastern Washington. This sparrow migrates to overwintering areas between central California and central Nevada, including as far south as northern Mexico. Population trends in the Great Basin and in individual states (Nevada, Utah) since 1966 are stable, as is the trend in Washington. However, the Washington trend is based on a small sample that may not be reliable. Declining trends have been reported in Idaho (moderate reliability) and Oregon (high reliability). There is no population estimate for Washington.

Very limited information is available regarding sensitivity of sagebrush sparrows to climate change, particularly in Washington, and particularly due to recent separation from Bell's sparrow. However, as sagebrush obligates that require relatively intact and undisturbed sage for breeding, sagebrush sparrows are likely vulnerable to any climate changes that affect the extent, quality, and connectivity of sagebrush habitats. Increasing fire frequencies (due to climate change and perpetuated by invasive species, e.g., cheatgrass), warming temperatures, precipitation variability, and drought are likely to contribute to reductions in sagebrush habitat, negatively affecting this species. Sagebrush sparrows may also be physiologically sensitive to warming temperatures; they avoid nesting on hot, southwest aspects, and position nests to maintain airflow (which is hypothesized to ameliorate high temperatures during nesting periods).