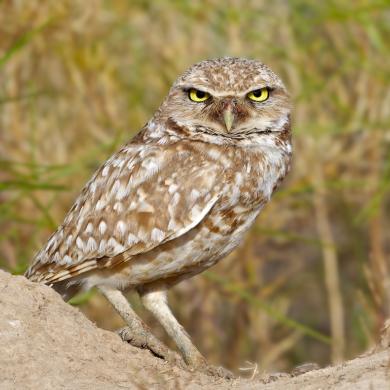 The population size of burrowing owls in Washington is low. This species is associated with shrubsteppe and grassland habitats, and has experienced a contraction of its range and decline in numbers due to loss of habitat and persecution of mammalian species that provide earthen burrows that owls use.

The burrowing owl is a small, ground-dwelling owl. Its total length is 7.5 to 10 inches. Both male and female are mostly similar in size and appearance. The head is round, lacking eartufts. This owl has bright yellow eyes with distinct broad, buffy-white eyebrows. Its wings and legs are relatively long, and its tail is short. The tail, wings, back, and head are brown with buffy white spots. During the breeding season, females are generally darker than males.

An adequate supply of prey, with enough diversity to meet the food needs of the owls throughout its life cycle, is critical -- generally, a healthy mix of arthropods, small mammals, birds, and reptiles. For owls to over-winter on or near their breeding grounds, the prey base needs to be adequate throughout the year. Insects are the most frequent prey in the diet, but vertebrates comprise the majority. Invertebrates include scorpions, beetles, grasshoppers, giant water bugs, dragonflies, moths, earwigs, termites, caterpillars, worms, sun scorpions, and crustaceans. Vertebrates include songbirds, blackbirds, waterbirds, young ducks, frogs, toads, salamanders, lizards, snakes, turtles, bats, mice, voles, shrews, ground squirrels, small weasels, and even young burrowing owls.

The burrowing owl is an uncommon breeder in eastern Washington. For nesting, they use abandoned mammal burrows, such as those made by ground squirrels, yellow-bellied marmots, and American badgers. Each spring, pairs return to the same burrows they inhabited previously, if still available. They defend the immediate area around the burrow entrance from other burrowing owls.

The burrowing owl is extremely rare during migration in western Washington.

Burrowing owl breeding records exist from most of the non-forested low elevation areas of eastern Washington, but historical information suggests that their range in Washington has undergone a significant contraction in recent decades. Burrowing owls have become uncommon to rare outside of Benton, Franklin, Grant, and western Adams counties. A portion of the Washington population winters in the Columbia Basin.

The burrowing owl has been declining in large portions of its range, which has contracted, particularly in northern and eastern regions. It is listed as an endangered species in Canada, a threatened species in Mexico, and a species of concern in several states. A reason for the population decline in Washington may be the reduction in numbers of ground squirrels, yellow-bellied marmots, and badgers, but loss of habitat to the intensification of agriculture and development has also affected the species. Burrowing owls seem to be attracted to agriculture due to high prey abundance, but surveys shows natal recruitment and adult return rates are lower, suggesting that agricultural areas may constitute a population sink.

Burrowing owls may exhibit low to moderate sensitivity due to climatic effects on breeding ranges, and decreasing habitat availability from land development pressures. Temperature-driven changes may cause this species to lose up to 77% of its existing breeding range and alter its winter range with only 33% remaining intact by 2080. Although temperature and precipitation changes may affect the availability of its preferred prey - insects - the burrowing owl has a generalist's diet, including other birds, small mammals (e.g., mice, voles), frogs, salamanders, and snakes. This species also depends upon other species such as prairie dogs and ground squirrels to create its nesting burrows.

A cooperative research project to identify migratory routes and wintering areas of Washington and Oregon burrowing owls was initiated in 2010 by the U.S. Fish and Wildlife Service Mid-Columbia River National Wildlife Refuge Complex, the Global Owl Project, and the Department of Defense Umatilla Army Depot near Hermiston, Oregon. Geolocators were attached to 20 burrowing owls at the Umatilla Depot. Geolocators are small devices that record light levels and, when recovered later from a bird, can be used to determine the bird’s movements to within 93 miles during migration. In 2011, WDFW became a cooperator in the study and an additional 73 geolocators were attached to adult owls (30 in Washington, 43 in Oregon). In May 2012, burrowing owls were again trapped to document banded birds that returned, band new birds, and recapture as many owls with geolocators as possible. Data from these geolocators indicated that most of the owls wintered in central or southern California. One male wintered in Washington. Other project partners and cooperators included Lower Columbia Basin Audubon Society and Tree Top, Inc.