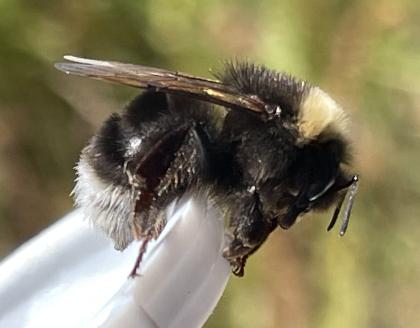 The population size of the western bumble bee is lower than historic populations and the trend is declining. Populations crashed in the 1990s, likely due to a combination of disease and other factors. Bumble bees have recently become the focus of conservation concern and efforts due to their precipitous population declines and prodigious capabilities as pollinators.

A 90-day finding by the U.S. Fish and Wildlife Service concluded that the western bumble bee petition presented substantial information that indicated that action may be warranted due to potential threats; therefore, a status review is currently being conducted to determine if the western bumble bee warrants listing under the Endangered Species Act.

The western bumble bee is classified within the Bombus subgenus and is a short-tongued species. See the Pacific Northwest Bumble Bee Atlas for a detailed description of this bumble bee species. The western bumble can be quite variable in hair color pattern. Williams, et. al (2014) describes 5 morphological types of queens and 7 morphological types of workers and males. In Washington, the most common hair color pattern for queen and workers are a black upper to mid-abdomen with a white tail at the end of the abdomen. Males are more variable.

Bumble bees depend on habitats with rich floral resources throughout the nesting season, and many species select specific suites of plants for obtaining nectar and pollen. They also select flowers based on their structure and the bee’s tongue length. Bumble bees require above and below-ground micro-sites for overwintering and nesting, including logs, stumps, and abandoned rodent and ground-nesting bird nests.

Bumble bees are adaptable; they do not require native vegetation. However, intensive agricultural development has been shown to result in regional bumble bee declines. Although habitat loss and insecticide use have played a role in bumble bee declines, their rapid and widespread declines even from apparently high quality habitats support the current prevailing hypothesis that pathogens introduced into the wild from commercial bumble bee facilities are the main factor in declines.

Bumble bee colonies are annual. In late-winter or early-spring, queens, which are the sole survivors from the previous year, emerge from their overwintering sites to feed on floral nectar, collect pollen, and search for suitable nest sites, which are often abandoned rodent holes. Bombus subgenus queens lay eggs in their individual nests and gather nectar and pollen to feed their first brood of workers. In the nest, eggs develop into larvae and then spin cocoons in which they pupate.

Once they emerge from their cocoons, the workers then take over tending and provisioning young, while the queen continues to lay eggs, and typically no longer leaves the nest.

Late in the season, the colony produces males and new queens which mate. Males, workers, and old queens eventually die; only the newly mated queens are capable of surviving through winter.

Bumble bees are key generalist pollinators of native plants and agricultural crops. Through their foraging and collection of nectar and pollen they physically transfer the latter between plants, allowing them to reproduce.

The bumble bees' unique behavior of “buzz pollination”, in which they grab onto and strongly shake an entire flower by vibrating their powerful wing muscles, results in large amounts of pollen being released and produces a more complete fruit set than other pollinators, including honey bees.

Recent surveys reveal significant declines in their numbers, distribution, and ranges. Surveys have located only a handful of populations in Washington, primarily in remote subalpine and montane sites. A 28% reduction was estimated in detected range area in a recent study, and western bumble bee was found largely absent from the western portion of its range.

Recently, the United States Geological Survey, in collaboration with bumble bee researchers, used data gathered in the Pacific Northwest Bumble Bee Atlas to model occupancy for the western bumble bee. They found a 93% decline in the occupancy over approximately two decades.

Additional surveys are needed to determine the location and number of extant Washington populations of western bumble bee.

For maps of the geographic range and conservation status of the western bumble bee and other information, check out NatureServe Explorer and the International Union for Conservation of Nature Red List.

Climate sensitivity of the western bumble bee (WBB) is likely driven by temperature increases, reduced snowpack, earlier snowmelt, later first frost, increased wildfire, drought, and increased frequency of temperature and precipitation extremes. In Washington, WBB is extant in several higher elevation sites where temperature increases, reduced snowpack, earlier snowmelt, and later first frost will likely disrupt the timing of the bumble bee's life cycle, sometimes with lethal effects; result in phenological asynchrony between the bee and key forage plants; and may eventually change the flowering plant species make-up. WBB has also been recently documented in the Palouse Prairie, an ecological system assessed as moderately vulnerable to climate change with a high confidence in the Washington State Wildlife Action Plan (SWAP). Temperatures may also affect the distribution of this species, as it appears to prefer cooler environments. Increasing fire frequencies may help maintain bumble bee foraging habitat by preventing conifer encroachment on meadows with abundant flowers, but will also likely be lethal to bumble bee colonies.

In general, bumblebees are likely sensitive to climate-driven changes in nesting, foraging, and overwintering habitat, but detailed information is currently lacking. Shifts in temperature, precipitation, and snowpack may affect bumblebee distribution and life history, potentially forcing them into unfavorable habitats, to emerge at non-optimal times (i.e., mismatch with vegetation), and/or affecting energy demands during overwintering periods. These climate-driven changes may also affect habitat quality and availability. One of the primary concerns for bumblebee species is a shift in the abundance, distribution, and/or phenological synchrony of key forage flowering vegetation, as pollen and nectar availability influences reproduction and overwintering success of queens.

Check out Habitat At Home to learn ways to attract pollinators in your own backyard, such as planting pesticide-free and native plants for butterflies and bees on your landscape or in a container garden; and see how to a craft a bee hotel! Habitat at Home, formerly known as the Backyard Wildlife Sanctuary Program, is the Washington Department of Fish and Wildlife's effort to encourage Washingtonians to connect with nature where they live.

The habitats of this species must also be protected from insecticides.

The Washington Department of Fish and Wildlife is taking part in an initiative that unites Oregon, Washington, Idaho, and California in a conservation effort dedicated to understanding and protecting bumble bees. The Western States Bumble Bee Atlas will establish a regionwide network to gather data to provide a better understanding of bumble bee distributions and habitat needs. This project builds on work done since 2018 by the Pacific Northwest Bumble Bee Atlas, a collaboration between state agencies and conservation organizations in Oregon, Washington, and Idaho. Fueled by volunteer community scientists, the atlas gathers data throughout the three-state area that helps shape conservation work.

The project is funded by the U.S. Fish and Wildlife Service’s Wildlife and Sportfish Restoration program through a competitive State Wildlife Grant, the U.S. Forest Service, the Bureau of Land Management, and the Oregon Conservation and Recreation Fund. Now, California is joining this effort, extending the geographic area covered to almost 15% of the contiguous United States. Nearly 60% of North America’s bumble bee species are known to occur in this region, underscoring the importance of this initiative.

WDFW partners with the U.S. Fish and Wildlife Service (USFWS), the U.S. Forest Service, and the Xerces Society to enhance habitat and help conserve the western bumble bee in the Olympic National Forest. Watch this short video produced in 2021 by the USFWS Washington Ecological Services Office and learn more about these important efforts aimed at benefitting this critical species and other pollinators. Audio Described version is available here.