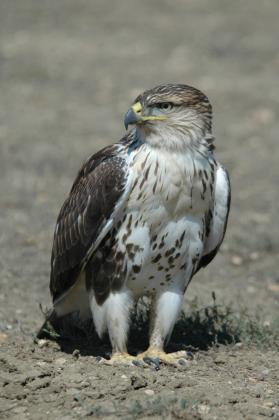 The population size of ferruginous hawks in Washington is low. This species is impacted by the loss and fragmentation of shrubsteppe and grasslands from agriculture and residential development and associated declines in distribution and abundance of its primary prey, jackrabbits and ground squirrels. Direct sources of mortality include illegal shooting, electrocution from powerlines, and collision with wind turbines.

The ferruginous hawk is a relatively large hawk with broad wings, a large head, robust chest, and feathered legs. This species averages 23 inches in length and has a wingspan of 56 inches. Females are noticeably larger. Males and females have similar plumage. This hawk can appear in two color phases. The light “morph” (phase) is snowy white below, reddish-brown above, grayish head, whitish tail, and underwing linings. The dark morph is a dark brown head, chest, and belly, and whitish tail and underwing linings. Underwing covert feathers are faintly speckled. Toes, "cere" (upper beak membrane), and beak margins are yellow.

Ferruginous hawks are migratory and occur in arid grasslands and shrubsteppe habitats.

The diet of Washington ferruginous hawks consists primarily of small to medium-sized mammals, such as jackrabbits, pocket gophers, mice, and ground squirrels, but often includes birds, reptiles, and insects.

This species arrives on its breeding areas from late April through July. Nests occur on small rock outcrops on the slope of steep hillsides or canyons or in isolated trees, such as junipers. The hawks often build on the remains of pre-existing hawk or crow nests. Conservation managers often take advantage of this behavior, providing artificial nests for hawks to build upon to help boost populations.

Following nesting, ferruginous hawks typically migrate to the eastern front of the Rocky Mountains to exploit abundant ground squirrels, followed by a migration to central California.

Washington state is on the northwestern edge of the species' breeding range. Over 200 territories have been documented in Washington, with Franklin and Benton counties together hosting about 60 percent. Grant, Walla Walla, Adams, and Yakima counties have had 13 or more territories each.

In 2002, only 20 percent of historical ferruginous hawk nesting territories in Washington were occupied, with many vacant for years. The current population size is unknown, but likely is very small.

Little to no information exists regarding ferruginous hawk physiological sensitivity to temperature and precipitation. Overall sensitivity of this species may be enhanced due to prey specialization (i.e., jackrabbits, cottontail rabbits, ground squirrels, prairie dogs, pocket gophers) and habitat requirements (i.e., grasslands). Warmer temperatures may benefit this species due to grassland expansion. Increased extreme weather events (e.g., heavy rain and high winds) may affect hawk reproduction and survival. Droughts that lead to declines in prey may adversely affect this species.