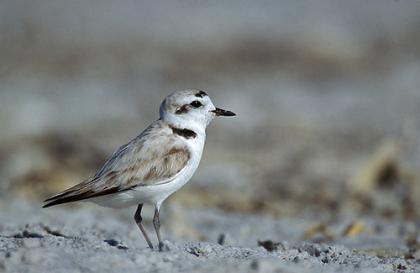 Washington's snowy plover population is very small and vulnerable to a variety of impacts, such as predators, adverse weather, shoreline modification, dune stabilization, and recreational activities.

The snowy plover is about 6 inches in length. It is pale brown or grayish above and has a white underside. It has a black bill. Legs are dark. A breeding male has a black headband, blackish ear patch and partial black breast band; a breeding female’s markings are less distinct. Non-breeding adults and juveniles are paler overall.

In Washington, snowy plovers are found (in any season) on coastal beaches, sand spits, dune-backed beaches, and sparsely vegetated dunes.

Snowy plovers forage on a variety of invertebrates found at coastal intertidal areas and around the margins of lagoons and salt marshes.

Snowy plovers nest on the ground on broad open beaches or salt or dry mud flats, where vegetation is sparse or absent. Chicks leave the nest soon after hatching, and they use small clumps of vegetation for cover. Chicks are tended by both parents (or male only), and the female often then abandons its first mate and brood within a few days to re-nest with a new mate.

Predation by gulls, common ravens, red foxes, skunks, raccoons, and/or coyotes may result in a high rate of clutch loss (eggs and chicks) in some areas.

The Pacific coast breeding population of snowy plovers extends from Washington to northwestern Mexico. Some are found further south during the winter months. In Washington, the species is found only in Pacific and Grays Harbor counties.

The Washington population consists of less than 100 adult birds, and is dependent on immigration from Oregon. Populations are responding to intensive conservation efforts, but viability analysis indicates that the Pacific coast population is unlikely to reach the federal recovery objective of 3,000 birds.

The dependence of western snowy plovers on coastal beaches and marshes as habitat for breeding and nesting increases their sensitivity to climate change. Sea level rise, beach erosion, and storm surges may cause declines in suitable habitat and decreases in local carrying capacity. Additionally, increased rainfall and storms could lead to declines in nesting success. Even without a loss of habitat, seasonal storms that wash over breeding areas will cause nest failure; this happens now with essentially benign weather patterns.

WDFW has conducted monitoring surveys and research of the snowy plover population in Washington for multiple decades in cooperation with U.S. Fish and Wildlife Service. In 2013, a predator management strategy that included direct hazing and removal of crows and ravens, the main nest predators, was initiated on Washington nesting beaches and may be contributing to improved nesting and fledging success in recent years.

According to the Washington State Recovery Plan for the Snowy Plover, the species will be considered for down listing to threatened when the state supports a 4-year average of at least 25 breeding pairs that fledge an average of at least one young per adult male per year at two or more nesting areas with “secure” habitat.

As of 2021, the Washington population consists of less than 100 adult birds, and is dependent on immigration from Oregon. A population viability analysis suggested that the West Coast population would not reach the recovery objective of 3,000 individuals identified in the federal recovery plan, without additional habitat restoration. As a result, control of beach grass and management to reduce human disturbance are ongoing. Although the snowy plover population in the region appears to be increasing as a result of management actions in Washington and Oregon, the species in Washington is still state listed as endangered.

Watch this video about the life history of snowy plovers and species recovery efforts by the U.S. Fish and Wildlife Service, Bureau of Land Management, and the State of Oregon and learn what people can do to share the beach with this special bird.