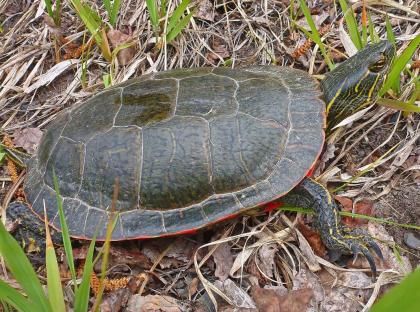 An adult painted turtle located in the Methow Valley 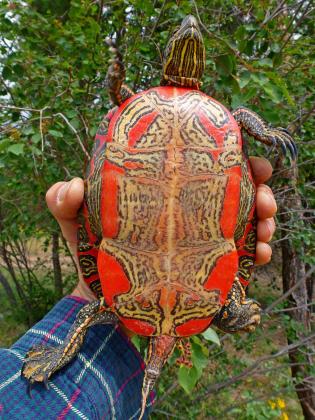 Note the brightly colored underside of this adult painted turtle.
Category: Amphibians
Family: Emydidae
If you see this species, please share your observation using the WDFW wildlife reporting form. Providing detailed information such as a photo and exact coordinates will improve the confidence and value of this observation to WDFW species conservation and management.

This turtle appears to be common in Washington and no specific conservation actions seem needed at this time; however, identifying where native populations actually occur is useful.

According to NatureServe, the state conservation status of the painted turtle population is considered “apparently secure” in Washington.

The painted turtle is easily distinguished from all other turtle species in Washington by the bright red or orange red markings on the plastron and undersides of the marginal scales of the carapace. These colorful markings are usually visible on basking turtles.

The painted turtle is a medium-sized aquatic turtle with a dark colored upper carapace (upper shell); bright red markings on the plastron (lower shell) and marginal carapace. The skin is black to olive with yellow stripes on the head, neck, legs, and tail. Adults range in size from 2.5 to 10 inches. Males are smaller; have elongate front claws on the three middle digits (digits 2, 3, and 4) that are used for courtship; and have a long thick tail with the opening to the vent located posterior to the margin of the carapace when the tail is extended. Juveniles resemble the adults but with brighter coloration.

The carapace is olive, dark brown or black; it may have yellow and red borders on the seams and has prominent red bars or spots on the undersides of the marginals (edge scales). Except in old individuals, the carapace is relatively smooth. No dorsal (topside) keel exists except a weak one in hatchlings. The posterior (underside) marginals are not serrated. The plastron is stunningly red. A large, lobed, yellow and black blotch exists in the center of the plastron, with the lobes following the plastral seams.

With age, the color of the plastron fades and the carapace becomes pitted and worn.

The painted turtle is primarily aquatic, straying from water only to lay eggs, for dispersal and at times of drought. Aquatic habitats include lakes, ponds, wetlands, and slow flowing areas of rivers and creeks. They prefer habitats that have muddy sediments and lots of aquatic vegetation. Terrestrial habitats include shrub-steppe, grassland, and forest. The wet, cool, mesic forests of western Washington are not suitable habitat.

Painted turtles are diurnal. They shelter under water at night and start the day by basking on rocks, logs and the shore. Basking also takes place throughout the day. They tend to be common where they occur and are easily spotted by searching basking sites. They are wary of people and will quickly slip into the water when approached. Often, individuals return to the surface swimming vertically with their heads protruding out of the water.

Research has shown that juvenile painted turtles, when taken by largemouth bass (Micropterus salmoides), will thrash and claw, often eliciting their release by the predator. This behavior is not exhibited by all turtle species but appears to give survival advantages to the painted turtle where predatory fish large enough to engulf juveniles, such as largemouth bass, are present.

This species is active as soon as water temperatures warm and the sun’s rays create conditions suitable for basking, usually in late March or early April. Female turtles migrate from water bodies to terrestrial egg laying sites in late spring and early summer. Turtles in Skamania County lay eggs in late May and June. In eastern Washington, egg laying takes place in June to July. Incubation time is not known from Washington populations, but the literature indicates 72 to 104 days from other areas in the Northwest. Turtles hatch in late summer or early fall and may migrate to breeding ponds or overwinter in the nest.

Adults overwinter in bottom sediments or within the flooded banks of water bodies.

Painted turtles have been documented in all Washington ecoregions but most occurrences are at the lower elevations of eastern Washington, the Columbia Gorge and the Puget Trough. The species was likely introduced to the Puget Sound region as the earliest records (Marysville – 1958, Bigelow Lake – 1960, and Ravenna Park – 1967) are relatively recent and associated with urban and residential areas. Today, the species is well-distributed throughout the Puget Sound region. Elsewhere in Washington, painted turtles are likely native.

This map from the Washington Herp Atlas illustrates the distribution of panted turtle in Washington based on records in the WDFW database as of 2016. If you see this species in areas that are not indicated on the map or have more recent observations (less than 10 years), please share your observation using the WDFW wildlife reporting form.

The state conservation status of the painted turtle is “apparently secure” based on the assumption that it is common according to the most current records. This species appears to be common in Washington and no specific conservation actions seem to be needed at this time. Identifying where native populations actually occur would be useful.

The major threats are to female painted turtles killed by vehicles while moving to and from nesting sites and from predation on nests and nesting females. Well-traveled roads located between terrestrial nesting sites and aquatic active-season sites have the potential to fragment turtle habitat in a manner that could extirpate local populations.

Understanding the actual distribution and status of native versus exotic populations of painted turtles in Washington is needed to determine whether any problems may exist. This issue can only be effectively addressed with genetic data.

Lindeman, P. V. 1988. Closed and Open Model Estimates of Abundance and Tests of Model Assumptions for Two populations of the Turtle, Chrysemys picta. Journal of Herpetology. Vol. 24, No 1: 78-81.