Slither, hop, or crawl on over to learn about herpetofauna! Washington is home to at least 25 species of amphibians (salamanders and frogs) and 28 reptiles (turtles, snakes, and lizards). Herpetofauna is the term used when referring to amphibians and reptiles together. Most herpetofauna lay eggs and are ecotherms, meaning they can't regulate their own body temperature and must warm up by basking in the sun or cool off by seeking shade.

Amphibians and reptiles are both important members of aquatic (water) and terrestrial (land) ecosystems, and they may use different habitats throughout the year. For example, some turtles spend most of their time in water, but move to land to lay their eggs.

Washington has just one venomous snake species, the Northern Pacific rattlesnake (Crotalus oreganus). These snakes can be identified by a rattle at the tip of their tail, diamond-shaped head, pits (holes) near the mouth, and white and black stripes towards the tip of the tail. They have dark brown or black blotched markings, usually with dark edges and light borders down the back, with corresponding blotches on the sides. 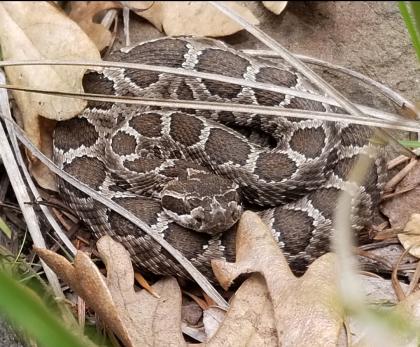 You may find Northern Pacific rattlesnakes in Central Washington, near Ellensburg and the Columbia River gorge, and in Eastern Washington. They are usually brown or olive, but their coloration varies to help them blend into their habitat.

Northern Pacific rattlesnakes are an important part of ecosystems. As predators, they eat rodents that spread diseases like Hantavirus, rabies, Rocky Mountain Spotted Fever, and Lyme Disease. By eating rodents, snakes help keep disease prevalence down and small mammal populations in check, making for a healthy ecosystem. Northern Pacific rattlesnakes are also a food source for many animals, including some raptors such as red-tailed hawks.

Rattlesnakes are venomous and can be dangerous to humans. Rattlesnakes DO NOT want to bite and may warn that you are too close with a rattle of their tail. Others will stay quiet, hoping you ignore them. When walking in rattlesnake country, be aware of your surroundings and take these precautions:

There is another snake in Washington that mimics rattlesnake behavior and appearance. The gopher snake (Pituophis catenifer) is large with dark blotches down the back with smaller blotches on the sides, a distinct eye stripe, and a tail that tapers to the tip. Adults reach up to five feet. The gopher snake uses its rattlesnake-like appearance to trick predators into thinking it is a more dangerous animal. They will often flatten their heads and curl into a defensive “S” shape. 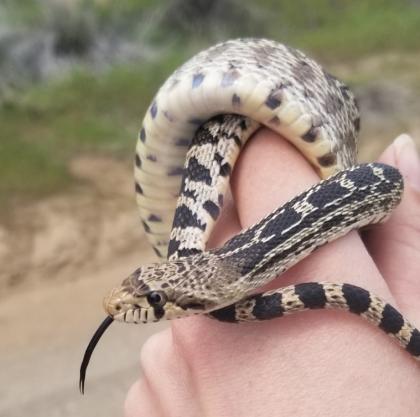 Gopher snakes suck in air to puff up their bodies and release a hissing sound when they are agitated. They will also shake the tip of their tail to mimic a rattlesnake. Gopher snakes are not venomous and are usually harmless, though they will strike if threatened. Like the rattlesnake, gopher snakes play a vital role in their ecosystems by keeping small mammal populations in check.

Don’t pick up a snake if you don’t know what it is! Most bites happen when someone tries to harm the snake or pick it up. Snakes want to be left alone to enjoy the sunshine and eat tasty snacks! If you see one of these snakes, observe them from a safe distance (at least six feet) and give it a lot of room if you need to go around it. If it isn’t safe to go around the snake, wait for the snake to move or turn around. Do not kill the snake or attempt to move it. Learn more about preventing conflicts with snakes.

The common garter snake is the most wide-ranging reptile in North America. In Washington it is found from coastal and mountain forests to sagebrush deserts, usually close to water or wet meadows - or your garden. They give birth to live young from eggs they keep in their body until babies hatch. Young are born from July through September, and fend for themselves after hatching. Small garter snakes eat earthworms and slugs; larger snakes may eat amphibians, small rodents, birds, and fish.

Other reptiles in Washington

Snakes aren't the only reptiles that live in Washington -- several lizard and turtle species also call Washington home. Watch the short video below for a glimpse of the variety of reptile species you could see in Washington. Then, visit our Species in Washington webpage to learn more about specific reptiles.

Although gopher snakes try to mimic rattlesnakes, there are a variety of ways to tell the difference between the two. Watch this 3-minute video from WDFW herpetologist Lameace Hussein to learn more about identifying the Northern Pacific rattlesnake.

Now that you’ve learned about the differences between Northern Pacific rattlesnakes and gopher snakes, it's time to reinforce what you learned by drawing them!

Amphibians are especially sensitive to a variety of threats because they have permeable skin, meaning they can absorb oxygen through their skin. That also means they can easily absorb chemicals and other harmful substances from the environment. By studying amphibians and their populations, scientists can get a better understanding of the overall health of aquatic ecosystems.

Let’s dive deeper into the amphibian world! Learn to identify common species by reviewing our Identifying Washington’s amphibians and their egg masses guide. You will find fun facts and defining features of these seven species:

Try out the quiz at the end of the guide to test your knowledge!

Did you know that a group of frogs is called an army? Make your own army of origami frogs that you can use for hopping competitions with your friends and family.

Watch the video below to learn how to fold your own jumping frog.

Grab some boots and get ready to go herping! Wait - what's herping?! The word 'herp' comes from Herpteology which is the study of amphibians and reptiles. Herpteology comes from the Greek word 'herpien', meaning to creep. Scientists and researchers use the term 'herping' for when they walk around looking for reptiles and amphibians.

Talk with your family to identify a place you can go herping together this week. Some of our favorite places to spot amphibians are West Rocky Prairie Wildlife Area Unit near Tenino and Ginko Petrified State Park in Vantage.

What to bring when you go herping:

Did you find an amphibian or reptile? Take a photo and report your finding to us online. When you report wildlife observations, you're joining the many community scientists who help reveal a more complete picture of wildlife species populations, health, condition, movements, and distribution.

You may not see a frog or toad with your eyes, but you can use your ears to listen for their sounds. Familiarize yourself with some common frog and toad sounds below. Pick a few species that you think could live in your neighborhood or nearby natural area and listen to them repeatedly. Next time you hear a frog or toad croak when you're outside, try to identify the species by its sound before you see it.