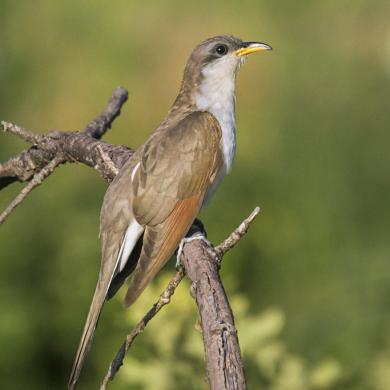 The yellow-billed cuckoo has been a very rare migrant and summer resident since about 1940, when it was last known to breed in Washington. Recovery efforts are probably best directed at remnant nesting habitats still occupied in the southwest United States.

The yellow-billed cuckoo is about 12 inches in length. This bird is brownish above and white below. The beak is yellow, hence the species’ name. The underside of the tail feathers has a bold black and white pattern.

A migratory species, yellow-billed cuckoos begin arriving in western North America in mid to late May. Most western birds arrive at their breeding range from early to mid-June and depart from late August to mid-September.

Most nesting occurs between June and early August, but can extend from late May until late September. This species usually builds its own nests and cares for its own young. In the west, nests are often placed in willows, cottonwoods, and shrubs. Two clutches may be laid in years of good food supply. Females occasionally lay their eggs in the nests of other birds.

Yellow-billed cuckoos nest across much of the eastern and central United States and parts of Canada, Mexico, and the Caribbean, and overwinter in the northern three-quarters of South America. Breeding also once occurred over much of the western United States, but is now largely restricted to a few areas of the southwest after major population declines. The population size and breeding range of western yellow-billed cuckoos have greatly declined during the past century, with only 680 to 1,025 breeding pairs estimated to remain as of 2017.

The species formerly bred uncommonly in parts of western Washington, but is now a very rare migrant statewide, with single records in four years between 2000 and 2014. Breeding probably ended in the state by about 1940.

Just 20 sightings of yellow-billed cuckoos have been documented in Washington since the 1950s, with 19 occurring from 1974 to 2016 at an average rate of one sighting every 2.3 years. Sixteen of the 20 records occurred in eastern Washington. All or nearly all of the birds recorded since the 1950s were very likely non-breeding vagrants or migrants, indicating that cuckoos are now functionally extirpated in the state.

Nevertheless, due to a lack of surveys for the species and the presence of small areas of habitat in Washington, the possibility exists that this species may occasionally breed in the state and that these rare breeders are yet to be discovered.

See the Climate vulnerability section above for information about the threats posed by climate change to this species. In addition, agricultural pesticide use, which may affect prey abundance as well as the birds' health, is a potential additional threat.