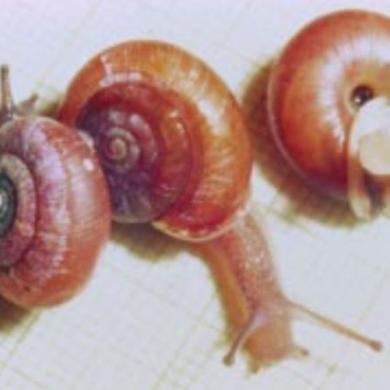 The Columbia Oregonian's population size is critical and has a declining trend. These snails are in the Family Polygyridae. Snails in this family are of conservation concern because they have specialized habitat requirements. Snails do not readily disperse and populations are isolated. They are vulnerable to alteration of their habitat.

The Columbia Oregonian snail is in the Polygyridae Family, which is a large and diverse family of roughly 294 described snail species in North America. The Cryptomastix species are medium to moderately large Pacific Northwest endemics.

Life history of the terrestrial Polygyrids, like the Columbia Oregonian, may resemble that described for the Oregon Forestsnail (Allogona townsendiana). This species is most active during the wet spring months when mating occurs. Adults lay eggs in new or existing flask-shaped nesting holes, or sometimes in pre-existing depressions in soil, moss, and under coarse woody debris, or at the base of vegetation. Juvenile snails hatch approximately eight to nine weeks after oviposition, and disperse from the nest site within hours of hatching.

Polygyrids are generally herbivorous and fungivorous snails. The Columbia Oregonian consume herbaceous plants in captivity, and may also consume algae on wet surfaces and decaying remains of herbaceous plants.

The Columbia Oregonian snail is known from 13 locations at the east end of the Columbia Gorge along both sides of the river from The Dalles to Rufus, Wasco and Sherman Counties in Oregon; this includes only four small sites in Klickitat County, Washington. Most locations are isolated from one another by the arid surrounding landscape. Originally also occurred in Skamania County, and in The Dalles, Oregon, but these sites were lost to by development. Specimens that may be this species suggest its range may extend north into Yakima County, and east along the Columbia and Snake Rivers and the Washington-Oregon border, in Umatilla and Wallowa Counties, Oregon, to Adams and Washington Counties, Idaho, but this requires confirmation.

For a map of this species' world-wide location and conservation status, check out NatureServe Explorer.

There is limited information on the sensitivity of the Columbia Oregonian snail to climate change. This species is found in low-elevation seeps and streams of the Columbia River Gorge as well as mid-elevation upland habitats (782-1000 meters) in hemlock forests. In each of these locations, the snails find cover provided by herbaceous riparian vegetation in aquatic environments and large woody debris in forests. Loss of these refugia would likely alter the temperature and moisture regimes – low temperature and moderate to high humidity – upon which this species relies.