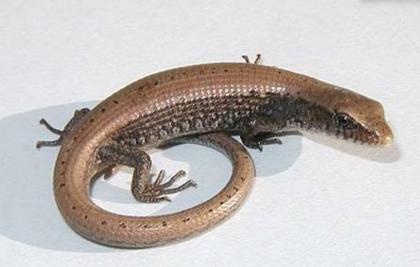 Alligator lizards are the only lizards in Washington with rectangular scales. Northern alligator lizards have brown eyes.
Category: Reptiles
Family: Anguidae
If you see this species, please share your observation using the WDFW wildlife reporting form. Providing detailed information such as a photo and exact coordinates will improve the confidence and value of this observation to WDFW species conservation and management.

Occurrences of this lizard are widespread throughout the range and no declines have been reported.

The lack of recent observations from some areas is likely due to a lack of survey effort and interest as well as this lizard's secretive nature.

According to NatureServe, the state conservation status of the northern alligator lizard population is considered “secure” in Washington.

The northern alligator lizard is a small, slim, gray-brown to brown lizard with rough (keeled) scales, short legs and a long tail. Adults can approach about 3.9 inches snout to vent length. The dorsal (topside) and ventral (underside) scales are rectangular. Along the sides of the body, between the dorsal and ventral scales, there is an area where the scales are small and the skin is able to expand and fold. The overall dorsal coloration is brown with black spots forming transverse bands across the dorsal surface. White spots may be present on the edges of the lateral scales. The underside is light colored with dark pigmentation on the lateral edges of each scale. The eyes are brown. The tail is easily shed. Males have a broader, more triangular head than females.

Hatchlings and juveniles are similar to adults but the dorsum is either plain brown or brown with only a single line of dark spots down the midline. The dorsal scales are typically lighter in color than the body folds.

The northern and southern alligator lizards are the only lizards in Washington with square scales and folds on the sides of the body. Southern alligator lizards differ in being larger (up to 5.5 inches snout to vent length with a tail that is double the length of the body), lacking dark pigmentation on the lateral edges of the ventral scales and in having yellow or gold eyes.

The northern alligator lizard inhabits grassy, brushy or rocky openings within forested landscapes. They have also been observed along road corridors and near lake edges. They can persist in low to moderately developed landscapes where they are typical seen in rock retaining walls, rock piles, woody debris and along building foundations.

They are active during the day but are secretive and rarely seen in the open. Most are found by turning rocks and woody debris. Even during intensive searching, it is possible to miss this species due to their secretive nature. In the spring, mating pairs have been observed within rock piles. The male bites the neck of the female and the two remain bonded for some time while breeding. In the fall, northern alligator lizards often enter houses presumably in search of overwintering sites.

The tail is easily shed when the lizard is threatened. Loss of the tail has consequences to the lizard that can include a reduction in reproductive fitness and lower chances of surviving stressful environmental conditions.

This species is relatively cold tolerant. Activity starts in late March to early April depending on location and weather conditions. Similar to our other lizard species, activity probably continues into October or early November. Breeding behavior has been observed in April and May in the lowland Puget Sound area. Females give birth about three months after breeding. Overwintering individuals have been found under rocks in borrow pits and hillsides.

This map from the Washington Herp Atlas illustrates the distribution of northern alligator lizard in Washington based on records in the WDFW database as of 2016. If you see this species in areas that are not indicated on the map or have more recent observations (less than 10 years), please share your observation using the WDFW wildlife reporting form.

The state conservation status of the northern alligator lizard is “secure” based on the assumption that it is common according to the most current records.

This species is vulnerable to predation by house cats. A lizard harassed by a cat will shed its tail. The cat is distracted by the wiggling tail and the lizard may escape unnoticed. Loss of the tail may have negative impacts on reproduction and survival of the lizard if food becomes limited.