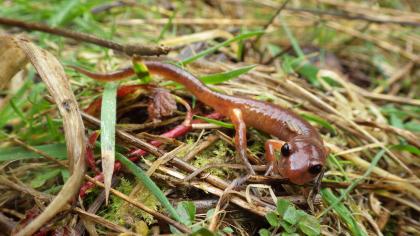 An adult ensatina found in Lewis County. (Caitlin McIntyre)
Category: Amphibians
Family: Plethodontidae
If you see this species, please share your observation using the WDFW wildlife reporting form. Providing detailed information such as a photo and exact coordinates will improve the confidence and value of this observation to WDFW species conservation and management.

This salamander is common and appears to be well-distributed throughout its historical range in Washington.

According to NatureServe, the state conservation status of the ensatina population is considered “secure” in Washington.

A small, brown or orangish salamander with large dark eyes, and relatively short body and legs. Adults are 1.5 to 3 inches total length. The tail is rounded in cross section and a prominent constriction exists at the base near the body. There are 12 to 13 costal grooves.

Juveniles are dark brown with bright orange patches on the tops of the limbs near the body. Young juveniles have a silvery metal-flake pattern on a dark background on the body, but they lose this pattern rapidly as they increase in size.

Males have an enlarged upper lip and long, slender tails. Females have short, stout tails. Ensatina is the only Washington salamander with a constriction at the base of the tail. The tailbase constriction is difficult to see in young juveniles, but these individuals consistently possess the bright orange patches on top of the limbs near the body.

For more details about ensatina, see the Washington Herp Atlas.

Ensatina are a terrestrial species inhabiting forests stands of all ages, but they appear to be more abundant in regions with moderate rainfall among the generally higher rainfall areas in western Washington. As a consequence, ensatina is more common along much of the west slope of the Cascade Mountains than it is in the Coast Ranges. Although less typical, they can also be found around clearcuts and other openings. They are usually found associated with woody debris including decaying logs (most often class 3) and stumps but also occur in talus and other rocky areas.

Nests have been found in rodent burrows, in decaying logs, and under slabs of wood or bark. Females sometimes lay eggs in crevices of downed logs under cover of thick moss. Three published accounts of nests found in Washington describe use of cavities within rotting logs.

This species has not been well studied in Washington. Studies from other states have found they are surface active at night when the ground is saturated with water and temperatures are moderate, primarily in the fall, winter and spring.

Based on the presence of sperm caps in the females and spermatozoa in the sperm ducts of males, breeding takes place from the time they emerge in the fall to the time they retreat below the surface in the spring.

Females oviposit (lay eggs) during spring and summer. Clutches are typically 5 to16 eggs in the Northwest. The female typically tends the eggs until the young hatch and are able to disperse. No free-living larval period exists; eggs hatch into fully formed miniature versions of the adults.

In Washington, ensatina occur in all ecoregions west of the Cascade Crest.

This map from the Washington Herp Atlas illustrates the distribution of ensatina in Washington based on records in the WDFW database as of 2016. If you see this species in areas that are not indicated on the map or have more recent observations (less than 10 years), please share your observation using the WDFW wildlife reporting form.