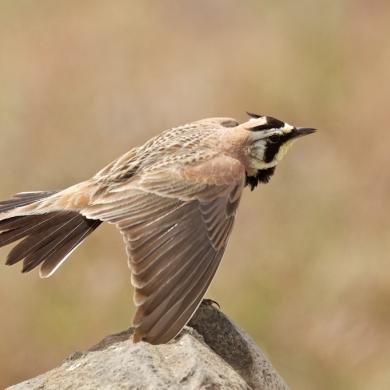 Note the "horns" on this male streaked horned lark. 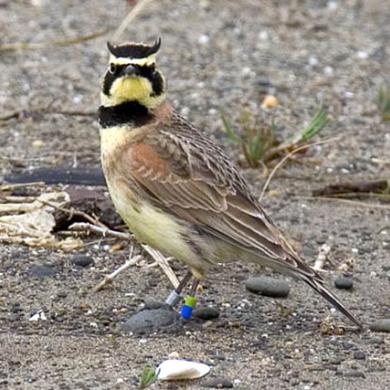 The streaked horned lark is a coastal subspecies only found in southwest Washington and western Oregon, with a range-wide population estimated at 1,170 to 1,610. It is an uncommon breeder on airport grasslands and remnant prairies, dredge spoil islands in the lower Columbia River, and beaches of western Washington and Oregon. Primary concerns are loss and degradation of habitat and human-related disturbance and mortality (example: mowing of grass) at breeding sites. is

The streaked horned lark is a slender, long-winged passerine about 7 inches long. Adults are marked with a dark facial mask and breast band that contrasts with a pale face and throat. These features are especially clear and distinctive in adult males, which have a yellow throat. The “horns” for which the species is named are tiny, black feather tufts on the sides of the head in adult males. Adult females are similar to males, but duller, smaller, and lack horns.

Streaked horned larks forage on the ground in bare fields or among short vegetation. They eat seeds and grass but feed their young insects, exclusively.

Streaked horned larks nest on the ground, where a clutch of three to five eggs is placed next to a tuft of vegetation or a small object. They may rear two to three broods per season. Nest building in southern Puget Sound generally begins in mid-April to early May, and concludes by mid-August.

Predation is responsible for most nest failures in Washington. Crows are the most important nest predator of streaked horned lark nests, which are also predated by western meadowlarks, some raptors and small mammals, and garter snakes.

The streaked horned lark was once more common and widespread, but has become increasingly rare with the decline in habitat, including south Puget Sound prairies. It is an uncommon breeder on airport grasslands and remnant prairies and beaches of western Washington and Oregon. It is considered extirpated in British Columbia. Evidence indicates that streaked horned larks in the Puget lowlands migrate south for the winter. Observations of banded birds throughout the winter suggests that some of these birds may overwinter in the Willamette Valley, Columbia River, and the Washington coast.

Streaked horned larks likely exhibit physiological sensitivity to warmer temperatures; they have been documented to alter behavior during warm periods (e.g., forage in shade, use wings to shade nests) and heat events have interrupted breeding season in other states. Streaked horned larks prefer open habitats with ample bare ground and very sparse, low stature vegetation. Populations in grassland areas may benefit from increasing fire frequencies that reduce vegetative cover and shrub/tree encroachment. Populations nesting on the banks of the Columbia River may be vulnerable to shifting flow regimes and flood peaks. Populations in beach/dune habitats along the Washington coast are vulnerable to changing sediment accretion and erosion patterns, which can change in response to hydrological shifts, current changes, changing precipitation patterns, and human management practices.

See the Climate vulnerability section for information about the threats posed by climate change to this species. In addition, toxic substances may present a hazard to streaked horned larks; these include zinc phosphide, used to control rodents, and seeds treated with pesticides to control pests and fungus.

Joint Base Lewis-McChord has collaborated with Center for Natural Lands Management, and currently with Ecostudies Institute, to monitor lark nests to help minimize impacts of mowing and training activities on nesting, and lark reproductive success improved in 2014 and 2015; no nests were lost to human-related causes in 2015. The Army Corps of Engineers recently committed to maintain and increase lark habitat at Columbia River dredged material deposition sites. These actions have improved the outlook for lark recovery.