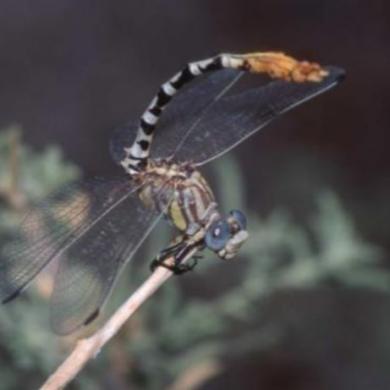 This insect is one of three dragonflies in the Gomphidae family that are identified as "species of greatest conservation need" (SGCN) in Washington due to the small number of isolated populations and continued threats to their habitat.

There is little information on the sensitivity of this species to climate change, but similar to the Pacific clubtail, it is likely influenced by air temperature, water temperature, and shifting flow regimes. Temperature is known to influence the phenology, development, behavior and other characteristics of dragonflies, and warming temperatures (both air and water) will likely impact this species during various life stages. Hydrological changes (e.g., reduced stream flows) and drought may degrade or reduce aquatic habitat available for this species and/or compound increases in water temperature. White-belted ringtail is also likely sensitive to disturbance events (e.g., fire, floods) that reduce riparian vegetation, which eliminates stream shade and foraging and roosting sites for adults, and/or that increase siltation, which can kill larvae.

This species is identified as a Species of Greatest Conservation Need (SGCN) under the State Wildlife Action Plan (SWAP). SGCN-classified species include both those with and without legal protection status under the Federal or State Endangered Species programs, as well as game species with low populations. The WDFW SWAP is part of a nationwide effort by all 50 states and five U.S. territories to develop conservation action plans for fish, wildlife and their natural habitats—identifying opportunities for species' recovery before they are imperiled and more limited.
Also in this section
© 2021 All rights reserved.