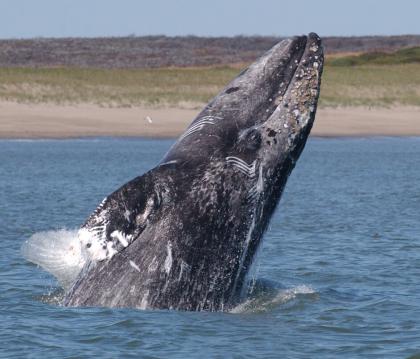 The Eastern North Pacific stock of gray whale has recovered from overharvest and has been stable for several decades; however, status of a small group within this stock, the Pacific Coast Feeding Group, whose range includes Washington, requires further assessment.

Gray whales are medium-sized baleen whales. Their length ranges from about 42 to 49 feet and their weight is about 45 tons. They lack dorsal fins and, instead, have a dorsal hump that is located about about two-thirds of the way back on their body, followed by a series of 6 to12 “knuckles” between hump and tail.

Gray whales migrate through deep waters. Young are born in lagoons and bays.

Gray whales feed in shallow continental shelf waters and at offshore banks, where “benthic” (bottom-dwelling) invertebrate communities are concentrated. The whale’s diet consists of these small invertebrates obtained from the sea bottom. Gray whales are the only whale species known to feed extensively on benthic animals. When feeding, the whales use the brush-like baleen in their mouths to strain out the tiny animals from the water they draw in.

Breeding occurs during southward migration or near the calving grounds, and gestation lasts about 13.5 months. A single calf is born in late December to early February. The calving interval is usually two years. Individuals become sexually mature at 5 to 11 years of age. The life span of this species is unknown.

Gray whales undertake the longest migration of any mammal, regularly traveling 10,000 miles round-trip and sometimes up to 14,000 miles annually.

The WNP population, federally classified as endangered by the U.S., primarily feeds in summer in the Sea of Okhotsk (mainly near the northeastern coast of Sakhalin Island, Russia) and off the southeastern coast of the Kamchatka Peninsula in the Bering Sea. Abundance, calculated in 2016 at roughly 271 to 311 individuals one year and older, remains far below pre-whaling numbers.

The ENP stock of this whale annually migrates 11,200 miles, roundtrip, between its summer range off Alaska and Siberia and its winter range in Mexico. Whales travel north from February to June and return south from October to January. Southward migration is more concentrated and closer to shore than northward migration.

Year-round distribution of the Eastern North Pacific stock extends from the Bering and Chukchi seas southward to Baja California, Sonora, and Sinaloa in Mexico. A few individuals visit Puget Sound annually, and are locally referred to as "Sounders."

Despite high levels of mortality in 1999 and 2000, the population has fluctuated around its average carrying capacity for the last 30 years. This stock has recovered from the impacts of whaling, and was estimated at about 26,960 whales in 2016, when it was believed to exist at or near carrying capacity. This population was federally delisted by the U.S. in 1994.

A small subpopulation of the ENP stock, known as the Pacific Coast Feeding Group, numbers about 243 whales and summers between southeastern Alaska and northern California, including Washington. Recent genetic data suggest this group is somewhat distinct from the main stock, but that some interbreeding occurs between the two groups.

For worldwide distribution and other species' information, check out NatureServe Explorer and the International Union for Conservation of Nature Red List.

Due to their migratory patterns and broad range of habitat, gray whales are unlikely to be physiologically sensitive to changes in ocean temperature or chemistry. However, their sensitivity will most likely be driven by potential alterations in prey abundance. A combination of increasing ocean acidity, increasing ocean temperatures, and other changing oceanographic patterns could lead to declines in the small benthic invertebrates that gray whales feed on (mainly amphipods, clams, and krill), as well as disrupt the timing and distribution of prey. Gray whales have extended their summer feeding range farther north of the Bering Strait in recent years in response to reduced sea ice coverage and greater prey availability in the Arctic Ocean. It is unclear how climate change may affect gray whales during migration or on their calving grounds in Mexico, when feeding does not occur. As marine mammal distributions shift in response to climate change, there is potential for changes in the overlap of species, which could increase the exposure of some species to novel diseases and parasites.

Gray whales face a number of known or potential threats such as entanglement in fishing gear and marine debris, ship strikes, human-generated marine sound, and climate change.  These could adversely impact the Western North Pacific population because of its small size and precarious conservation status. The Pacific Coast Feeding Group is also a concern due to its small size and the substantial level of uncertainty pertaining to its possible status as a separate stock under the Marine Mammal Protection Act

The WDFW participates in the National Oceanic and Atmospheric Administration (NOAA) West Coast Marine Mammal Stranding Network. On May 30, 2019, NOAA Fisheries declared the elevated rate of gray whale unexpected strandings on the West Coast an ‘Unusual Mortality Event’ (UME), triggering a scientific investigation into the cause. Between 2019 and early 2021, over 200 gray whales had stranded on the coasts of California, Oregon, Washington and Alaska in this event, the most since 2000, when more than 100 whales stranded in what was also determined to be a UME. For more information, visit NOAA Fisheries Marine Life In Distress: 2019-2021 Gray Whale Unusual Mortality Event along the West Coast and Alaska.

Watch biologists perform a necropsy of a gray whale stranded on a Washington beach in the video below. The goal of a necropsy is to examine the animal and determine the cause of death.